Graham: 'When Putin Looks at Biden, He Sees Neville Chamberlain’ 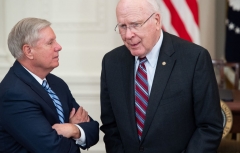 “Yesterday I think was February the 21st, 2022. In the eyes of President Putin of Russia, Ukraine no longer exists as a sovereign independent nation. He basically declared to the world that Ukraine is a puppet state, a colony of the west, and he doesn't recognize it as an independent nation. That should send chills up everybody's spine,” he told Fox News’s “America’s Newsroom” on Tuesday.

“I want to remind the world and the American people that in 1994 Ukraine had the third largest nuclear weapons inventory in the world after the collapse of the Soviet Union,” the senator said.

“They signed an agreement with the Russians, the British and the United States where they would give up their nuclear force in exchange for a guarantee of sovereignty by Russia regarding Ukraine, and when that agreement was signed in 1994, Crimea and the Donbas, they were considered to be part of Ukraine, and in that agreement there was a pledge by Russia not to threaten Ukraine with force,” he said.

“So Putin tore up that agreement as Hitler did in the 30s, and we're in a very bad spot in the world right now,” Graham said.

Fox News host Dana Perino asked, “Do you have an idea as to why the White House last night called the actions by Putin an incursion and then this morning as of 9:02 am was calling it an invasion?”

“Number one we need more Churchills and less Neville Chamberlains. The West, particularly led by the Biden administration has had a Neville Chamberlain approach to Putin, to Iran, to many other areas. So why did they call it an invasion? Because it is and it was an unsustainable concept. Putin has declared parts of the Ukraine independent, no longer part of the sovereign nation of Ukraine. If that's not an invasion, what is?” Graham said.

“Peacekeepers don't come in in tanks. They've occupied the Donbas in violation of the Minsk agreement, so I'm glad to see they’ve changed. I’m glad that Germany is now going to decertify Nord Stream, which is a cash cow. Marco and Newt are right. We should turn on Keystone Pipeline. We should export liquified natural gas to Europe to help them regarding their dependency on Russian oil and gas. We will not do that,” he said.

“We should secure our southern border. Before I went to Munich I spent three days in Israel and three days in the United Arab Emirates. What did I learn? That terrorism is on the March, that Afghanistan is growing in terms of terrorist influence. They are headed to America and our border is broken,” the senator said.

“How has that turned out?” Perino asked.

“It's turned out terrible for the people of Ukraine, because when Putin looks at Biden, he sees Neville Chamberlain. We only have one president at a time. I stand ready to work with President Biden to do an emergency supplemental. I've been on the phone with several democratic Senate colleagues who are willing to help Ukraine in terms of cyberattacks,” Graham said.

“They're willing to flow more assistance into Ukraine. We need to be doing a lot of things. We should create a task force, the Department of Justice, State and Treasury to go after Putin's oligarch friends who benefit from these misadventures,” the senator said.

“So unfortunately, Joe Biden is not going to toe-to-toe with Putin. He is getting run over by Putin, and the Iranians are watching, and the Chinese are watching. So to President Biden, if you want some help in Congress in the Senate to be tougher against Russia, I stand willing to help you. If you continue this appeasement track I will be your worst nightmare,” he said.