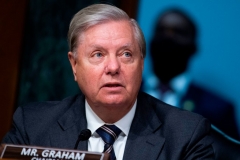 He noted that Democrats had eight years under former President Barack Obama to do something on the issue, but didn’t.

“I spent five hours … on the Judiciary Committee listening yesterday, and it was a fascinating hearing. There’s a process in the Air Force called listen, learn and lead. To my colleagues on the other side who said we talk too much. We don't need to listen anymore. Where were you for the eight years of the Obama administration?” Graham asked at a Capitol Hill press conference on the Senate’s proposal for police reform.

“I'm getting a little tired of being lectured to by my Democratic colleagues that all of this is Trump's fault. You had eight years under President Obama. The Justice in Policing Act, none of it was taken up virtually, so let's knock that off,” he said.

“You’re making no points with me trying to suggest that we’re bad and you all are not when it comes to this issue. You had eight years - no attempts to ban chokeholds, no attempt to do any of the things that we all agree we need to do now. So If you want to fight about that, let's fight. If you want to admit that the country needs to move on together, let's do it,” the senator added.

Graham called Trump’s executive order on police reform, which was signed on Tuesday, “a good start.”

“I appreciate him starting the conversation. He brought families into the White House. They appreciated being listened to by their president. To my Democratic colleagues, I appreciate putting together your list. I'd like to work with you, but we’re not going to get there if we keep playing this game that we are exclusively to blame here,” the senator said.

Graham thanked Sen. Tim Scott (R-S.C.) for his work on police reform legislation, calling him “the right person at the right time” and adding that God has a plan for him, and he’s fulfilling that plan and trying to bring the country together.

He noted that there are “real differences” between Scott’s proposal and the Democratic proposal.

“Now, their shopping list, for lack of a better term, of what to do compared to Tim’s. There's a lot of overlap, but there’s some real differences. How do you hammer out those real differences? You talk to each other. After the hearing, I had multiple Democratic colleagues come up to me and say, let's try to reconcile our differences,” Graham said.

“To the American people, after the hearing I am more hopeful than I was before the hearing that there is going to be a genuine effort to bring reform to a problem that's been going on well before President Obama, and if we don't do something about it it's going to go on well past President Trump,” he said.