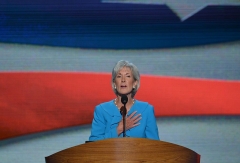 Secretary of Health and Human Services Kathleen Sebelius speaks to the audience at the Time Warner Cable Arena in Charlotte, North Carolina, on September 4, 2012 on the first day of the Democratic National Convention (DNC). The DNC is expected to nominate US President Barack Obama to run for a second term as president. (Photo by STAN HONDA/AFP/GettyImages)

(CNSNews.com) – Former Congressman Trey Gowdy (R-S.C.) said Wednesday that it’s ironic for Rep. Joaquin Castro (D-Texas) to call for an investigation into Secretary of State Mike Pompeo speaking at the Republican National Convention on Tuesday, given that five cabinet-level Democrats spoke during the Democratic National Convention in 2012.

Castro, chairman of the House Foreign Affairs Oversight and Investigation Subcommittee, issued a statement, saying “This action is part of a pattern of politicization of U.S. foreign policy for which President Trump was impeached by the House of Representatives. That undermines America's standing in the world. The American people deserve a full investigation." 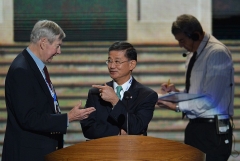 General Eric Shinseki attends a sound check at the Time Warner Cable Arena in Charlotte, North Carolina, on September 5, 2012 ahead of events on the second day of the Democratic National Convention (DNC). (Photo by STAN HONDA/AFP/GettyImages)

“So if you're going to investigate noncompliance with the Hatch Act, if you’re going to accuse Mike Pompeo, how many cabinet-level officials spoke at the DNC in 2012? Five. So I will trade the power of incumbency. I think people understand incumbents have power – congressional incumbents do, presidential,” he said.

“I’ll trade the power of incumbency and power to grant a second chance for a level playing field. How many stories have we seen about the number of cabinet-level officials that spoke during President Obama's DNC? So if you’re gonna ding Mike, at least be fair about it,” Gowdy said. 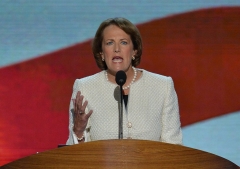 Karen Mills speaks to the audience at the Time Warner Cable Arena in Charlotte, North Carolina, on September 5, 2012 on the second day of the Democratic National Convention (DNC). (Photo by STAN HONDA/AFP/GettyImages)

According to the U.S. Office of Special Counsel, the Hatch Act “limits certain political activities of federal employees, as well as some state, D.C., and local government employees who work in connection with federally funded programs.”

“When you look at the precedent that has been set in making these kind of moments during presidential elections. You have FDR who accepted the nomination of his party by radio address. You also have President Obama who recorded political ads during his election from the White House,” Fox News anchor Martha MacCallum said. 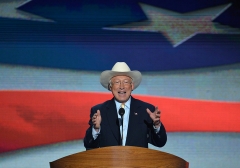 Secretary of the Interior Ken Salazar speaks to the audience at the Time Warner Cable Arena in Charlotte, North Carolina, on September 4, 2012 on the first day of the Democratic National Convention (DNC). (Photo by STAN HONDA/AFP/GettyImages)

“You have Ronald Reagan and Jimmy Carter who both announced they would run again from the White House. So there is plenty of precedent. I'm also told that the White House and campaign lawyers looked into this every which way from Sunday to make sure they were on firm legal ground in terms of the way that this was carried out, and they believe they are,” she said.

“If there is an investigation to prove otherwise, that will be hashed out, and the Hatch Act will no doubt be brought into that discussion as they try to iron that out,” MacCallum added.