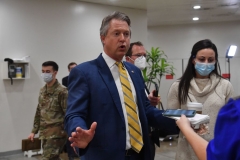 (CNSNews.com) – The war in Ukraine will lead to a worldwide famine in the next two years, warned Sen. Roger Marshall (R-Ky.), who serves on the Senate Agriculture Committee, warned on Tuesday.

“You know I’m a big agriculture guy. Twelve, 15 percent of the agriculture products - corn and wheat, sunflower oil - come through that Black Sea, so— and fertilizers come from that area as well, so there actually is going to be a famine one to two years from now. I think two years from now will be even worse,” he told Fox Business’s “Mornings with Maria Bartiromo” on Tuesday.

“What does it cost to take care of millions of refugees? We’re already going to be spending $15 billion dollars right now helping out, and I just want to compliment the people of Poland what great job that they’re doing. Half of them have taken refugees into their home, so they’re doing an incredible job,” said Marshall, who was one of 10 senators who visited Poland and Germany recently.

“Did you just say there will be a famine in Europe in the next two years?” Host Maria Bartiromo asked.

“This will be a worldwide famine. I think it will be even worse next year than this year. So if 12, 15% of the wheat comes from Ukraine that’s exported, and they’re having problems getting fertilizer, they’re having tractors in the field, all the diesel fuel is going towards their war efforts, right?” the senator said.

“So if all that’s clogged, all the USAID that we spend, all those type things, there’ll be a famine across the world, and we are seeing it right now. I think American farmers are doing their best to respond, but we can't get fertilizer. The fertilizer prices have quadrupled. Diesel food has doubled. So many of the fertilizers and the herbicides we can't even get right now,” he said.

“That’s the story of America right now is over dependence, whether it’s chips being made across the ocean or we have depended on Russian oil. We once upon a time were dependent on Iran oil. I wonder why keep making the same mistakes?” Marshall said.

On Ukraine, the senator warned it could be a ploy that Russia agreed to cut military operations near Kyiv while Ukraine and Russian negotiate.

“We are hearing same thing that you are hearing. We did establish good communications with folks in Ukraine from Ukraine on the trip, and we spoke with them again yesterday, and I think reporters got it right. Be careful. This could be just a ploy. What we are being told is America continues to slow-walk getting military aid in there,” he said.

“Here we are five weeks into this war, and military aid is just starting to get into Ukraine, but it’s not what the Ukrainian people need. Look, they’re doing their best. They’re neutralizing the ground game right now and actually having some victories, but they’re losing the shelling war that Russia’s continuing to bomb the heck out of them, shell them,” Marshall said.

“What they need right now in Ukraine are weapons that will take out missiles that are being launched from the sea and Russian soil as well. So be careful. This could be another ploy, but it’s certainly true from all things that we’re hearing that Russia is really struggling with their supply chains, their morale all those type of challenges up north around Kyiv,” he said.

Marshall said he heard that the United States is slow-walking aid to Ukraine.

“You are right, and we’re even told on the ground that we were whispering in front of our allies’ ears to not be giving weapons as well or not be expediting them, so I don't know what the problem is, but I do know that the people in Ukraine are bravely fighting. They’re fighting for democracy,” the senator said.

“The people we met--- the horrors of war that they told were just absolutely chilling, bodies piled up in the streets that they couldn't get buried -- hospitals being bombed - all these atrocities of war, and certainly, Putin is struggling,” he said.

“I do see a path for victory for the Ukrainian people, but they need all the help that we can give them, all the weapons, the military aid that we can get them, and I’m going to caveat of course that I don't want any American boots on the ground or any Americans flying over Ukrainian airspace,” Marshall said.

On the Iran deal, the senator called it “a horrible deal” for Israel and America. The deal “helps Iran fund terrorism even more,” he said.

“We are trying to find a way, working hard with the greatest legal minds I know up here - the Ted Cruzes, the Mike Lees, the Josh Hawleys, and John Cornyns trying to figure out a way to do it. We have one small angle that possibly we can sue the Biden administration, but it’s an uphill battle. We are struggling to block it right now. I do not know why this president wants to empower Iran, the world's largest funder of terrorism,” he said.

On the budget, Marshall said that the Biden administration is describing the bill as increased funding for homeland security, “but there’s not money for border security.”

Corporate taxes go up. They pass that onto consumers going to raise inflation, Steve Forbes, this budget is absolutely inflationary, and going to cause significant problems,” the senator said.

Marshall said the odds of the budget passing are “none.”

“Absolutely none. This is dead on arrival. What it describes though is this president’s-- his priorities, and it’s a big tip of his hat once again to the far-left, but we will start all over, but it describes his priorities. He’s not giving up on Build Back Better," he said.