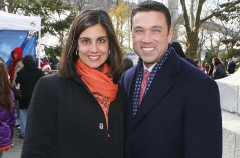 (CNSNews.com) – Congresswoman-Elect Nicole Malliotakis (R-N.Y.) told CNN’s “State of the Union with Jake Tapper” on Sunday that one of the reasons why she ran for Congress was seeing Democratic women elected in 2018 “that don’t necessarily reflect our values, particularly those who are self- described socialists.”

Host Dana Bash pointed out that the congresswoman-elect’s mother is from Cuba, and her father is from Greece.

“What do you think this says about the future of the GOP, a future that a lot of people over the past few years have been pretty worried about?” Bash asked.

“Well, look, this is what I have always known about the GOP, that we are a big tent party, that we do have people that come from different places from around the world. We do incorporate women, and now we're seeing women having a seat at the table, which is tremendous,” Malliotakis said.

When you look back in our nation's history, the first female member of Congress was a Republican woman, Jeannette Rankin in 1917, and we have come such a long way from then. I think it's upon people like Nancy and I to now pay it forward, to recruit other women,” the congresswoman-elect said.

“One of the reasons why you saw so many women take office on the Republican side was because of the efforts of Leader Kevin McCarthy, because of people like Elise Stefanik, Liz Cheney, Steve Scalise, who went out there and recruited qualified women who have something to share with the American people and who have the experience and the background to be productive participants in the legislative process,” she said.

“And I think some of the -- one of the reasons why we were so motivated to run is seeing the Democratic women being elected in 2018 that don't necessarily reflect our values, particularly those who are self- described socialists. Somebody like me, the daughter of a Cuban refugee, I want to be there to be a part of the discussion and the debate and provide a counterview,” Malliotakis said.

Republican women more than doubled their numbers in the U.S. House, Bash noted.

When asked why Republican women performed better this year than in the past, Congresswoman-elect Nancy Mace (R-S.C.) said, “Well, we had more women running this year, and it was an exciting time. We saw in 2018 a record number of Democrat women run and win, and if women want to have a seat at the table, then we have got to raise our hand and say, we are going to step into the arena, risk it all, and we are going to run, and we have to have more women run to win, and we can't just do this year in 2020.

“This is something we have to do especially in the House every two years, when we have our election cycles, but we made a huge difference this year, and if we want to have a seat at the table, women have to run, and they have to win,” Mace said.

“And the great thing about this story this year, Dana -- and I'm so appreciative of you having Nicole and I on today -- is that it's not just Democrat women that have a monopoly on breaking glass ceilings. Republican women have been doing it all year long in these elections all across the country,” she said.

“And, in fact, 26 of the 27 toss-up races here this year were won by women, minorities, combat vets, and, in my case, I was in a lean Democrat seat that we took back this year, and it's just an exciting time to be part of history, with all these great hardworking women,” Mace added.

“Well, Democrats have just done a better job of recruiting women to run. And I believe the Republican Party, they have finally come around, and we're -- I look at our freshman class right now, and we really reflect the faces of America, the diversity, and the inclusion that we have in the Republican Party. That is our future,” Mace said.

“And if we don't get on board with recruiting the right people, minorities, women, veterans, et cetera, then we're going to lose in the future. And I think it's really important that our values of freedom and entrepreneurship can speak to folks all across the country from all walks of life and all the diversity inclusiveness we can have in the Republican Party,” the congresswoman-elect said.

“And I know our conservative message, we haven't done as good of a job as a party in communicating it to the masses, because it is a compassionate message. And when you look at all the races that we won this year, that messaging really worked, particularly in my case. We won. We had a very narrow race, but there were narrow races all across the country,” she said.

“But I think what's important now, too, is, we're talking about the turnout in the election and all the seats that were flipped this year, but there was massive record turnout on both sides of the aisle, 70 to 75 percent in my case,” Mace said.

“And I think this is a real referendum from the American people on D.C. to sit down and find where we do agree, where we do get along, and work together. We have got to do that for the -- for hardworking Americans. With COVID-19, with governments shut down state to state, people are struggling, and we have got to come together and work hard for the American people,” she added.

Bash pointed out that Malliotakis spent a lot of time during her campaign focusing on Rep. Alexandria-Ocasio-Cortez (D-N.Y.), a member of the so-called Squad, and now Malliotakis wants to form a Freedom Squad.

When asked what that means, Malliotakis said she and other new GOP House members will serve as “a counterbalance to the values of the socialist Squad” by standing for freedom and liberty.

Well, look, we have a natural alliance that is occurring among the members of this new freshman class. I think people will be very impressed with this class, by the way, but what I will say is, we have individuals who share similar experiences as my family. As I mentioned, my mother's a daughter -- my mother's a Cuban refugee. My dad is an immigrant of Greece.

We also have individuals like Carlos Gimenez, who came to this country as a 6-year-old boy from Cuba. We have Maria Salazar, who is the daughter of political refugees from Cuba as well. We also have Victoria Spartz, who is from the Ukraine, who grew up under Soviet Union rule, and we have two members who are immigrants from Korea.

I think what you're going to see is a group of individuals who are going to serve as a counterbalance to the values of the socialist Squad, and what we stand for are freedom, liberty. We love this nation. We want to see it prevail. We want to see it remain the land of opportunity, what has, in essence, attracted millions of immigrants from around the world, to pursue that American dream.

And particularly me being from New York City, in her backyard, where we're seeing that socialist movement grow, six additional members of the New York state legislature, they're putting up a slate of candidates in the City Council, it's critically important that New York City has a balance and someone who is going to offer something different.