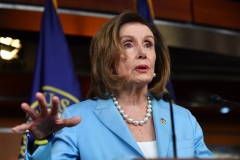 Speaker of the House, Nancy Pelosi, Democrat of California, speaks during her weekly press briefing on Capitol Hill in Washington, DC, on May 19, 2022. (Photo by NICHOLAS KAMM/AFP via Getty Images)

(CNSNews.com) - Rep. David Kustoff (R-Tenn.) said Wednesday that the three things that the American people care about right now are inflation, crime, and the border, but House Speaker Nancy Pelosi (D-Calif.) is only focused on codifying Roe v. Wade through congressional statute.

“Yeah, that's a great point, and the Democrats are really scrambling, because they are getting pushed so hard and so far from their left side,” Kustoff told Fox Business’s “Mornings with Maria Bartiromo,”

“They knew that this decision was likely coming because of the leak that came out unfortunately from one of the law clerks or the court clerk personnel, but they're going to try to either from an administrative standpoint dictate that these abortions be performed on federal lands within states,” the congressman said.

“Pelosi has already said that legislatively they're going to push as hard as they can to try to -- you will legalize abortion, ratify Roe V. Wade through statute, through codification and the fact of the matter is, listen, people are talking about it in my district, but the 3 things that people care about are inflation, crime and the border,” he said.

“And I bring all of that up, Maria, because if Pelosi really is searching for an answer, the fact of the matter is that in Pelosi's Washington the Democrats – none of us walk and chew gum very well at the same time together,” Kustoff said.

“Between now and the November election, we are in the House of Representatives legislating 23 days, 23 days between now and the election. So every day that she takes up trying to address how to try to, in her mind overturn what the Supreme Court has ruled in this Dobbs case, is a day we’re not addressing these other issues,” the congressman said.

As CNSNews.com reported, according to a new Gallup poll, 67 percent of Americans say they’re experiencing financial hardship due to high gas prices.

When asked what he can do about it, the congressman said, “So from an administrative standpoint when we look at what Biden says, when he talks about this gas tax relief the 18 cents, which doesn't do anything in real terms to help people, he looks -- when he addresses the nation on energy issues or likely any energy issues, he looks weak and feckless, and so there are no solutions.

“The easy thing to do is to reverse his policies that he put in place at the beginning of his administration, restarting the Keystone Pipeline, encouraging American producers to in fact want to produce.  Instead of Biden going to the Saudis and begging them and Venezuelans to produce more oil, he ought to go to the Texans and the Alaskans in the north and all of the domestic producers and say, ‘I was wrong. Let's do what we did during the Trump years when we were energy independent. We want you to produce domestically,’” he said.

On the question of whether the United States is in a recession right now and whether inflation gets worse because hundreds of billions of dollars in COVID relief funds have yet to be appropriated in certain states, Kustoff said, “So to your point the more money that the federal government prints and flushes into the economy it has a detrimental effect in a recession. It feels like we are in a recession. It feels like we’re slowing down, and to your point, the attitude of people certainly in my district and across the country, they don't feel good about the economy.

“They don't feel good about the economy for what you said, for what they are paying for gases -- for gas and for groceries, and they open up their 401k statement, and it's really depressing. They tell me they looked at retiring. They’ll have to continue working, because they lost their savings. They’ve lost their investments,” he said.