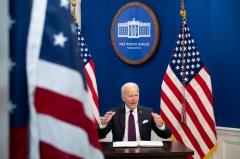 (CNSNews.com) - Rep, Chuck Fleischmann (R-Tenn.), who serves on the House Appropriations Committee, said Friday that President Joe Biden has been “a divider” who is “rudderless and confused.”

“I'm shocked really from the inception President Biden has taken this country totally in the wrong direction. I can remember vividly and fondly in the Trump administration every key indicator, the economy, jobs, foreign policy, we were clicking everywhere. The world was looking at us,” he told Fox Business’s “Mornings with Maria.”

“The country was coming back. There was optimism. Sadly, President Biden from the inception has doubled down on zero, and when you double down on zero, you get zero, but how you could blame Republicans is far beyond anything else,” Fleischmann said.

“They are confused. They are wrong. I really wish Biden had come out the other day, and said look, he got it wrong in the first year, and he wanted to recalibrate, but I just don't see it,” he said.

When asked what we can expect in terms of priorities if the GOP takes the majority in the midterm elections, Fleischmann said, “First of all, plain and simple common sense, economic common sense, foreign policy common sense, looking at our great constitutional Republicans saying we need to embrace the values that have made this country great.

“Biden has really acquiesced to the radical left of his party and that was the biggest sadness I thought. I really thought Joe Biden, even though I disagreed with him and would never have voted for him was going to try to be a unifier. He's been a divider, he's been rudderless and confused,” the congressman said.

“So what the Republicans are going to do is get back to basics, make sure that our economy gets strong again, attack inflation at its root causes and things like that. Get Americans back to work. Stop the crazy vaccine mandates and things like that - just good-old common sense and guess what, people in the center will embrace that and America will come roaring back,” he added.

On immigration, Fleischmann is one dozens of lawmakers in the House and Senate who are calling on the DHS inspector general to investigate Biden’s actions on the border.

When asked what he would like to see the investigation uncover, Fleischmann said, “I'm the ranking member, highest Republican in appropriation subcommittee we have a porous border. There is no border policy.

“They are just wandering all over the place, millions of illegals are coming in. It's wreaking havoc in this country. I want accountability. I want a policy, and I want to make sure that America has a border policy that is secure. It's border security and immigration, not just immigration,” he said.