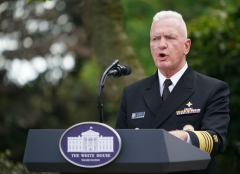 Admiral Brett Giroir, MD, Assistant Secretary For Health, United States Department of Health and Human Services speaks on Covid-19 testing in the Rose Garden of the White House in Washington, DC on September 28, 2020. (Photo by MANDEL NGAN/AFP via Getty Images)

(CNSNews.com) - Dr. Brett Giroir, former coronavirus testing czar for the Trump administration, told the House Select Committee on the Coronavirus Crisis, that not only does the evidence point to the origins of COVID-19 being a lab leak, but the World Health Organization (WHO) is not equipped to investigate it, because it has “no authority to do anything in China that is not directly approved by the Chinese Communist Party.”

Giroir was one of several scientific experts who testified on the pandemic’s origins.

He said that although there is not “indisputable evidence pinpointing the exact origin of the virus that causes COVID-19,” his assessment is “that the most likely origin was an accidental infection of laboratory personnel from the Wuhan Institute of Virology with secondary infection to the local population and subsequent spread to hundreds of millions of people around the world.”

He pointed out that the WHO tested “more than 80,000 wildlife, livestock, and poultry samples from 31 provinces in China” but “failed to detect the presence of the virus,” which weakens the argument that the virus came from an animal.

Moreover, the closest virus found in nature was ‘several decades of evolution removed’ from the COVID-19 virus, and we now know definitively that the Wuhan wet market was not the origin of the virus, but was a site of secondary spread.

Point number two, we know that the Wuhan lab was conducting potentially dangerous research on coronaviruses and their ability pandemics including gain-of-function research. This was proven in a 2015 Nature Medicine publication in which investigators from Wuhan and collaborators across the globe reported creation of a new hybrid bat coronavirus that could bind to and infect human airway cells.

Number three, since that 2015 publication, there have been multiple NIH grants to the alliance all entitled the risk of bat coronavirus emergence, and from the limited public information, appear to be using the exact same laboratory methods that could create novel hybrid pandemic-causing pathogens.

Number four, independent scientific studies conclude that the first cases of coronavirus in China occurred sometime between mid-October and mid-November of 2019. This is the exact timeframe, according to the U.S. intelligence, that some Wuhan lab workers became ill with a respiratory infection and that according to the Wall Street Journal, three Wuhan lab workers sought hospital care for an unknown respiratory illness.

And finally, the bottom line is, I believe it is just too much of a coincidence that a worldwide pandemic caused by a novel bat coronavirus that cannot be found in nature started just a few miles away from a secretive laboratory doing potentially dangerous research on bat coronaviruses. Sometimes the most obvious explanation is indeed the correct one.

Giroir said that “the WHO cannot be relied upon to do an authoritative investigation because it is a multilateral organization with no authority to do anything in China that is not directly approved by the Chinese Communist Party.”

He also said he was blocked from joining the WHO’s executive board by then Senate Minority Leader Chuck Schumer (D-N.Y.) and the Democrats.

On behalf of the Trump administration in September 2020 delivered a comprehensive roadmap to the WHO that would strengthen the WHO’s global emergency preparedness and response capabilities. This roadmap would better equip the WHO for future pandemics, but by the WHO’s very nature as a multilateral organization, it can never be relied on to guarantee transparency from repressive regimes nor ensure the health and safety of the American public.

Finally, with regard to the WHO, when this pandemic first emerged in China and began spreading around the world, the only eligible nation that did not have a member on the WHO executive board was the United States.

That is because after I was nominated for the executive board by President Trump in November 2018, my nomination was repeatedly blocked by Senator Schumer and his Democrat colleagues, and I was not confirmed and thus, the U.S. did not have visibility at the executive board level until May of 2020.

Perspective number four, the final one, the investigation of the origins of COVID-19 and the regulation of gain-of function research cannot be left to scientists alone, many of whom have serious conflicts of interest.

These conflicts include hundreds of thousands of dollars in annual salary, pharmaceutical company paid advisory board seats, millions of dollars in grants, rights to inventions that could result in tens of millions of dollars of royalties, and perhaps most important, their reputations among an often elitist scientific community that is overwhelmingly biased against anything related to the Trump administration.

Similarly, Americans should be careful of defenses of China by experts who are employed by or are on the boards of companies with billions of dollars at stake in China and who fear reprisals by the Communist Chinese Party.

In conclusion, it is critical to our nation, to the American people, to the world, and to future generations that we develop a bipartisan consensus on the truth of what happened, and I respectfully encourage the entire Congress to come together as truth seekers and truth tellers to accomplish this objective.