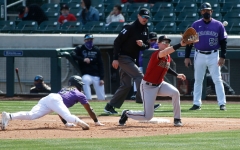 Pavin Smith #26 of the Arizona Diamondbacks fields a pick-off throw as Raimel Tapia #15 of the Colorado Rockies dives back to first base during the third inning of the Cactus League spring training baseball game on February 28, 2021 in Scottsdale, Arizona. (Photo by Ralph Freso/Getty Images)

(CNSNews.com) – Georgia Gov. Brian Kemp pointed out the hypocrisy in Major League Baseball’s decision to protest Georgia’s new election law by moving the All-Star game to Colorado, which has voter ID laws and where there are two less days of early voting compared to Georgia.

The governor also pointed out President Joe Biden’s hypocrisy for doing the pregame for the NCAA championship in Indiana, the birthplace of photo ID voting requirement and the place “where the first lawsuit was upheld that says it's okay to have a voter ID.”

Kemp told Fox Business’s “Mornings with Maria Bartiromo” on Wednesday that corporate America “folded like a wet rag to cancel culture.”
“It is woke in real life, and Americans and Georgians should be scared. What event are they going to come after next? What value do you have the way that you live your life are they coming after next? Are they going to come after your small business next because that’s who’s getting screwed here, Maria?” the governor said.

“It’s the small business people that would have profited from the All-Star game being at park at the home of the Atlanta Braves, and now they are moving to Colorado. They have two days less of early voting than we do. They have a voter ID,” he said.

“You know, President Biden’s been talking about how bad voter ID is. He did the pregame for the NCAA championship the other night that was all held in Indiana. That's the birthplace of photo ID. That’s where the first lawsuit was upheld that says it's okay to have a voter ID,” Kemp noted.

“Most Americans and most Georgians support this. This is so hypocritical, and to your question, it is, it's amazing that CEOs that have government affairs teams that knew what was in this bill that were fine with it, they didn't even bother to check with them because they got pressured from the woke,” the governor added.

The governor also pointed out that Biden’s home state of Delaware actually calls “your name out before you go vote in the precinct so people could challenge you.”

“Well, number one, President Biden is lying to the American people and our own citizens here in Georgia. I just laughed to myself, Maria, when he's talking about we need to smarten up. I mean, look at his own state of Delaware. They actually call your name out before you go vote in the precinct so people could challenge you. Can you imagine if we had that in our law? I mean, the world would be falling apart right now,” Kemp said.

“He needs to focus on his own state and not worry about Georgia. This bill makes it easy to vote and hard to cheat. We are doing away with the signature match process and implementing voter ID on absentee ballots. We’re securing ballot drop boxes that were never in the law before this year,” the governor said.

“We’re making election officials count continuously until every vote is counted so you don't have disruptions that brings doubt and, you know, it's just good common sense, election security making it easy to vote but hard to cheat,” he said.

When asked why he felt the need to change the election law in Georgia, the governor said, “Look, it wasn't just me. We held strong majorities in the general assembly in Georgia in November.

“Speaker Ralston put a committee together based on a lot of things that we had seen that legislators, myself and others had heard post-election, also in the runoff, things like Senator Perdue and Senator Loeffler had told us and a lot of other things, and so the general assembly responded to that, and they talked to local elections officials and the local elections officials told them some of the problems.

“We had a 351 percent increase in absentee ballots by mail, and the signature match process just did not work very well. You can't take the time to really scrutinize that. It’s antiquated. It takes a long time to process, a long time to count and that's the reason we put the voter ID on there, to make it more secure and also to speed the process up,” he said.

“Now the other side, they’re not talking about the speeding the process up and making it easier for the county elections officials. The same thing, we did not have ballot boxes before this law in Georgia. So we had to deal with that, because that was done by emergency rule by the secretary of state and the state election board, and that's really where the just of all the things came from,” Kemp said.

Election Day is supposed to be Election Day, not Election Week or Election Month. Far too many days are given to vote. Too much ‘mischief’ can happen during this very long period of time. You saw that in the 2020 Presidential Election. How’s Ruby Freeman doing?

Governor Brian Kemp and Georgia Secretary of State should have eliminated no-excuse, widespread mass Mail-In Voting, gotten rid of the dangerous and unsecure Drop-Boxes, and should have kept and EXPANDED Signature Verification to do matches against the historical voter file, among other things! Hope the RINOs are happy.

Kemp also caved to the radical left-wing woke mob who threatened to call him racist if he got rid of weekend voting. Well, he kept it, and they still call him racist!

When asked to react to Trump’s statement, the governor said, “Well, Maria, as I said earlier, the fact that this bill makes it easy to vote and hard to cheat in Georgia. It's Republicans that have, you know, put in places a lot of these things over the years.

“The general assembly continues to support that but they also want them to be secure, but also to deal with mechanical problems that we saw in the election, and that's really what we are doing, whether it's voters being intimidated or harassed while they are standing in line and making sure that we have, you know, a clear line in the sand on, you know, when you can do that, when you can't to make sure that people don't get bothered when they are trying to vote or slow the process up,” he said.

“I mentioned dealing with ballot drop boxes. We expanded accessibility for people to vote in Georgia. The Democrats are attacking us about how bad the bill is and we’re suppressing the vote, and we’re racist, and this is Jim crow 2.0, even though they reserved that domain name weeks before they knew what was in the bill, and that's not what's happening here. This bill makes for secure, accessible fair elections in Georgia, and every single Republican voted for it,” Kemp said.

When asked whether Biden should apologize to the American people for lying, Kemp said, “What President Biden, Stacey Abrams, all of these other CEO's of these companies that are in New York and New Jersey and former CEO's that are pressuring people like Delta and like Major League Baseball, Coca-Cola and others, they should be truthful with people.

“They should look at their own damn laws in their own states. They are more restrictive than ours are. This is so condescending, and look, this is all a power play, Maria. Look at the long game that the Democrats and Joe Biden … are playing. This is all about HR1 and SR1. They want a federal takeover of elections in our country. That is an unconstitutional power grab,” the governor said.

“Our founders set it up for the states to run elections, to prevent foreign interference. That's the way the Constitution says, and that's the way it should be but make no mistake. All this is just trying to pressure these corporations. They’ll say, hey, we’ll give you a pass on this if you come out and support this federal legislation and we gotta to continue to spread the word to the American people. We need to unite and fight -- we need to unite and fight against this,” he said.