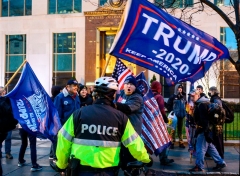 Pro-Trump supporters stand behind police as they argue with counter protesters during a confrontation near Black Lives Matter plaza in Washington, DC on January 5, 2021, on the eve of a rally of supporters of US President Donald Trump to protest the upcoming certification of Joe Biden's Electoral College as president. (Photo by ANDREW CABALLERO-REYNOLDS/AFP via Getty Images)

During a panel discussion on Fox News’s “Bill Hemmer Reports,”  American Conservative Union Chairman Matt Schlapp said he thinks that it will give the American people a chance to hear President Donald Trump’s concerns.

“I think that it's going to be a chance for the American people to hear the Trump concerns, and the supporters and the 73 million Americans across this country about the illegal votes that are in the count,” he said.

Schlapp said he’s seen thousands of examples of illegal votes that were counted in Nevada and Georgia - enough to flip the election results in Trump’s favor.

“I spent a lot of time in Nevada. We found over 100,000 examples of illegal votes in the count, which would flip the results in Nevada. The same is true in Georgia where I just came back and sat down with the lawyers there. We're going to have to get to a place where judges and state legislators are too worried to intervene on illegal voting. Republicans will never win close races of the presidency again, and I for one thing that is something that can't stand in this republic,” Schlapp said.

Hahn said he expected the House to act like “a clown show,” but the Senate “should rise above it.”

“The American people deserve better. These senators who are acting seditiously should know better. They are supposed to be the cooling saucer of the republic. I expect a clown show in the House of representatives. The United States senate should rise above it. Josh should agree with me on that,” he said.

Senate Majority Leader Mitch McConnell’s former Chief of Staff Josh Holmes said he thinks there’s evidence of voter fraud that should be looked at, but he doesn’t think it should be done during the Electoral College.

“We've elected the last three Republican presidents exclusively because of that. So I worry a lot about the precedent of trying to undermine that in this period of time. I also think it has absolutely no chance of working. So it seems like at some point are we just perpetuating this false hope for Trump supporters that ultimately there's going to be a different outcome when inauguration day comes along,” he said.