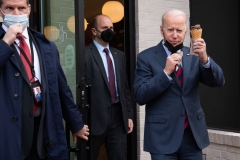 (CNSNews.com) – Former Sen. Scott Brown (R-Mass.) said Wednesday that President Joe Biden and the Democrats are “like a never-ending pileup of cars on the highway – there’s just so much going wrong.”

“You don't even know where to start. You can start with Afghanistan in my book, and then you can go to the border and then you can go to the virus, the fact that he hasn't controlled it and eliminated it like he said he was going to do. Then you go on inflation and now you see Russia, Ukraine, the supply chain issues. You can go on, and on, and on,” Brown told Fox News’s “Hannity.”

“Then you have a vice president who’s-- I don’t know if she’s trying out for the show ‘Veep.’ Are they bringing it back? Because she’s been completely out of touch and not helping the administration. The poll numbers, yes, they’re dramatically low. The key here though we've seen poll numbers. I was down 41 points with like six or eight weeks to go, and I ended up winning by eight,” he said.

“Poll numbers are okay. It's a good barometer, but we can’t—we have to let the American people know what Republicans actually stand for, and I'm concerned that that message is not crystal clear, because we can be crystal clear as Governor Youngkin did in Virginia. What do you stand for?” the former senator said.

“What do we as Republicans stand for and why and how are we going to convince those independents or former Republicans who want to get back to the winning team and want to basically be a check and balance of this out-of-control administration?” Brown asked.

Former Senior Counselor to President Trump Kellyanne Conway said the American people are saying that the Biden administration doesn’t do anything well.

“They’re upside down on their approval/disapproval ratings on every core issue, and it happened so precipitously quickly. It's true that Afghanistan was the inflection point, but now people are very upset that every day the nexus between bad policymaking and their struggles around the kitchen table have come to bear. The woman in the focus group is saying, ‘Gee, I've never known a president who had so much control over my everyday decisions in my life,’” Conway said.

“That's really bad, not just for Joe Biden and Kamala Harris, but for the Democratic Party. We have more people calling themselves Republicans now then since 1994 when you had a much more popular president in Bill Clinton, and they still lost 54 seats and control of all three chambers. So they've got a problem all the way around,” she said.

Conway also rejected calls by some to put Vice President Kamala Harris on the Supreme Court to replace Justice Stephen Breyer, who announced his retirement officially on Thursday.

All this nonsense about putting Kamala Harris in the Supreme Court, she’s terribly unqualified for that job. She was rated the most liberal senator above Bernie and Elizabeth Warren for goodness sake, and she also disqualified herself just by politicizing the vaccine, being so extreme on abortion.

When Trump was running for president, he put out a list of 21 people - men and women - with names, and backgrounds, and you can research them if you want to do, telling you, I'm going to choose from this list if there's a Supreme Court vacancy, and he did exactly that whereas Joe Biden is coming up with demographic attributes. Of course there are qualified people of both genders, of all races and backgrounds, to serve on the United States Supreme Court.

He doesn't have to say it and commit it, and he does that to over-politicize something as sacrosanct and that should be free from politics at the Supreme Court, but right now, I've never seen polling numbers like this so quickly in the first term, but people have turned on Joe Biden. Particularly, the center has cratered. Independents are done with him. Over 70% say don't run again.

I never thought I'd say this, Sean, but two years after it started, they really should put them back in the basement for a while. I think his polling numbers will go up the less we see of him. And finally the Democrats don't have a messaging problem, or even a messenger problem. They have a fact problem.
Their ideology, their ideas, their policies are just out of step and out of sync with the rest of the country. You can't fix that through a focus group or an ice cream stop. They have a fact problem. Out of touch.