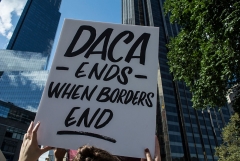 Wolf agreed with former Senior Trump Advisor Steven Miller’s assessment of the U.S. Citizenship Act of 2021 as “the most radical immigration bill ever written, ever drafted, ever submitted in the history of this country.”

“I think he is correct. This bill is fundamentally flawed. This is not in my view a serious effort at immigration reform. We all know that our immigration system certainly needs some needed reform. This is not it. It doesn't go nearly as far as border security measures and enforcement that we need,” Wolf told “Fox and Friends.”

He said he was “a little disappointed in the Biden administration of putting basically a wish list together of those on the far left and submitting this as a bill.”

The bill includes an eight-year pathway to citizenship and green card eligibility for Dreamers and undocumented farm workers.

Wolf agreed with Republicans who say the bill amounts to amnesty.

“Well, that's absolutely correct. I mean, what you are saying -- what they are saying is that ... 11 million individuals here illegally, individuals that broke the law to come here to the country are now given a pathway to citizenship and given status,” the former acting DHS secretary said.

“So I think for the millions of Americans that follow the law every day, the millions of immigrants who follow the process to become citizens - and it's a lengthy process - this flies in the face of that, and it sends absolutely the wrong message, and what we know from previous amnesty attempts is that if you do this, this is an extremely incentive for future populations to come to the U.S. hoping that they, too will get amnesty in the future,” he said.

Del Rio, Texas, Mayor Bruno Lozono pleaded with the Biden administration not to release illegal immigrants awaiting court dates into his city and surrounding areas, because they don’t have the resources to house and accommodate them within the community, especially as they deal with power outages from the winter storm.

“I will have no choice but to use the extreme measure under the emergency declaration as the mayor of the city of del Rio Texas to refuse the entry of migrants awaiting court dates into the city of del Rio. If you do send these individuals into our community. We will be forced to make a decision to leave them without resources under these dire circumstances,” Lozono said.

“It's really quite remarkable. It seems as though the Biden administration and the officials at DHS and others learned nothing from the crisis that we saw in 2019. What the mayor just outlined there we learned from hundreds of border communities along the border in 2019 where we had a massive crisis and influx of individuals,” Wolf said.

“We put together a patchwork of policies and procedures that reduced that flow significantly and in just a matter of weeks here, since Inauguration Day, there’s been a number of executive orders and policies that have created a border crisis, a humanitarian crisis the mayor outlines there. They have created this out of whole cloth. It didn't need to occur,” he said.

“It was under control, but again, the number of these policies continue to be very, very concerning, and then, of course, the bill, the legislation that we're talking about further incentivizes folks with amnesty. They reduce penalties for border crossers. They provide attorneys for those coming into the country,” Wolf said.

“So, there is a number of pull factors that the Biden administration unfortunately is sending the signal to smugglers and traffickers and others that it's okay to come,” he added.