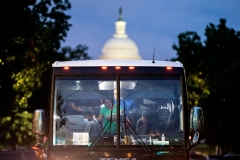 Migrants, who boarded a bus in Texas, are dropped off within view of the US Capitol building in Washington, DC, on August 11, 2022. (Photo by STEFANI REYNOLDS/AFP via Getty Images)

(CNSNews.com) - Former Acting DHS Director Chad Wolf said Friday that the mayors of New York City and Washington, D.C. should be leaning on the Biden administration to actually do something about the border crisis so that hundreds of thousands of migrants aren’t flooding into cities across the country.

Despite being turned down the first time, D.C. Mayor Muriel Bowser wrote a letter to Defense Secretary Lloyd Austin, asking him to send in the National Guard to help D.C. deal with the migrants that are being bused to the nation’s capital by Texas Gov. Greg Abbott.

“Look, what Mayor Bowser, Mayor Adams in New York City should be doing is leaning on the Biden administration to put policies and procedures in place to stop this crisis so that we don't have hundreds of thousands of migrants going into all cities across the country. That's what they need to be focused on,” he told Fox Business’s “Mornings with Maria Bartiromo.”

“As far as the National Guard is concerned, they need to be advocating again for that at the border to help Border Patrol, to help CBP control that border, but it’s gonna take leadership by the administration to do that at the end of the day,” Wolf said.

He called it “absolutely bizarre” and “very hypocritical” that Adams is complaining about 250 illegal immigrants being bused to his city when Texas deals with 7,000 illegals each day.

“Obviously they only care about this issue when it impacts their cities and their communities,” the former acting DHS secretary said.

“Folks in Texas and Arizona and California and others along the border have been impacted for the past 16 to 17 months so what Governor Abbott's having to do is basically shame big city mayors like Mayor Adams and Mayor Bowser to actually care, to actually get involved in this fight and be part of the solution and to lean on the Biden administration to solve this issue at the end of the day,” he said.

He pointed out that “both D.C. and New York City are sanctuary cities.”

“These are cities that have encouraged illegal immigrants to come to their communities,” Wolf said. “DHS has been flying these individuals into the state of New York, into states all over this country for months and months and months.

“It's only until they see them firsthand getting off buses that they seem to care, that they seem to raise any type of concern at the end of the day. It's bizarre, their view. This administration wants this crisis to go away,” the former acting DHS secretary said.

“When's the last time we heard from the president, the vice president or DHS secretary in a public setting, in a press conference to answer questions about the border, to actually outline their strategy at the border?” he asked.

“Just several days ago they formally ended Remain in Mexico or MPP. They have taken a vital tool away from the Border Patrol to help solve this crisis and they're offering no solution, no plan, and no strategy in return,” Wolf said.

The former acting DHS secretary said that a new Fox News poll shows that “the vast majority of Americans disagree with this broken and failed border strategy that the administration is undertaking.”

“They need to change course. They need to set new policies and new procedures in place. This can be solved, and it can be solved relatively quickly but it takes leadership. It takes hard decisions to actually do that at the end of the day and this administration continues not to do any of that,” he said.

“Again, they don't want to talk about this issue. They hope it goes away, and I don't believe it is because the vast majority of Americans see what's going on down there. They're throwing their hands up and they’re saying after 15, 16 months, aren't you capable enough, aren't you competent enough to actually put something in place that stops this and, again, Americans want a change,” Wolf said.