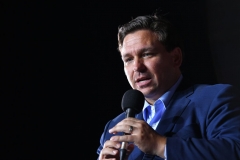 Florida Governor Ron DeSantis speaks during a campaign rally for the US president at Pensacola International Airport in Pensacola, Florida on October 23, 2020. (Photo by MANDEL NGAN/AFP via Getty Images)

“If you're gonna start talking about National Guard, what he should be doing is sending them to the southern border to get that under control, because that's a catastrophe,” the governor told Fox News’s “Sunday Morning Futures.”

“Month after month, we see 100, 200,000 people coming illegally. He inherited a policy under Donald Trump which was effective, and now it's a total disaster, and so he's criticizing governors, criticizing Florida, Texas, but that's his job to secure our country, and he’s failed to do so,” DeSantis said.

During a CNN town hall on Thursday, CNN’s Anderson Cooper asked the president if he would consider having National Guard members drive trucks to deal with a record high truck driver shortage.

“The answer is yes, if we can’t move to increase the number of truckers, which we’re in the process of doing,” Biden said.

However, when asked to clarify on Friday where things stand in terms of the National Guard and the supply chain, White House Press Secretary Jen Psaki said, “Well, any president has the ability to use the National Guard from the federal level.

“Requesting the use of the National Guard at the state level, which is often how it’s done, is under the purview of governors, and we’re not actively asking them to do that, and we’re not actively pursuing the use of the National Guard on a federal level, but it is something that any president would have the capacity to do, the authority to do, but it is not something under active consideration,” she said.

DeSantis said that Florida has “the logistical know-how and capacity” with its ports and supply chain there would be no need for the National Guard in his state, “because we’re modernized.”

Furthermore, the governor said that when it comes to the supply chain, ports in his state are always a 24/7 operation.

As CNSNews.com previously reported, President Joe Biden announced that California ports, which are responsible for 40 percent of shipping containers that are imported to the United States, will now move to a 24/7 operation to alleviate supply chain bottlenecks.

“We're really proud of our sea ports. Since I've been governor we’ve invested about $1 billion into modernizing them and making them more effective so we have capacity. If there are ships that are idled off the west coast and actually there’s some off Savannah on the east coast as well. We've already had some from Savannah be rerouted. We can accept that. We have more capacity,” the governor said.

“They made a big deal recently about California ports would start doing 24/7. We always do 24/7 in Florida. So we have multiple options. Each individual port can offer companies incentive packages to be able to do it,” he said.

“Obviously, that's a good thing for Florida because we're driving more economic activity in our state and we've been doing very well, but it's also good for the country to be able to alleviate these logjams because to have shortages continue to pile up and especially as we get into the Christmas season, it's driving inflation higher. It's a huge problem. Florida can step up and help be a partial solution to this national crisis. We want to do it,” DeSantis said.

The governor said his state’s economy is thriving during COVID, because he protected employees’ right to work and businesses’ right to operate.

“The nation as a whole was down 5% compared to 2019 pre-COVID and so we have been able to protect hundreds and hundreds of thousands of jobs, thousands of small businesses, and we’ve provided more and more opportunity. We have 400 to 500,000 job openings right now in Florida,” DeSantis said.

“You go back when COVID first started, everyone thought since we have such a service based and tourism-based economy, that we would have massive problems for years to come, and we were able to make sure we protected people's right to work and businesses' right to operate and the result is we've really been leading the way now in terms of these economic numbers even in the face of a lot of hostile trends coming out of Washington, D.C.,” he said.