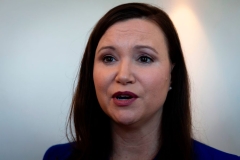 Ashley Moody, Florida Attorney General, talks to the media during a meeting to prevent human trafficking at Fontainbleu Miami Beach, in Miami Beach on January 9, 2020. (Photo by EVA MARIE UZCATEGUI/AFP via Getty Images)

(CNSNews.com) - Florida Attorney General Ashley Moody said on Thursday that while it’s not uncommon that she was not notified beforehand of the FBI’s raid on former President Donald Trump’s private residence at Mar-a-Lago in Florida, it’s uncommon that there is such a raid over “a document dispute.”

“Of course, you know, you have federal, statewide -- federal cases and state cases so that's not uncommon,” Moody told Fox Business’s “Mornings with Maria Bartiromo.”

“What is uncommon, I can tell you as former prosecutor is a raid of dozens of FBI agents over what we hear presumably is a document dispute, and I can tell you, that is not common in these types of investigation, and I'm urging for the sake of the Independence and integrity of our law enforcement institutions that Merrick Garland and Christopher Wray come out very soon and start being transparent with Americans: Why this was necessary, why this had to be done in a raid fashion as opposed through subpoenas, why a search warrant? These are very important issues and I think this needs to be done immediately,” she said.

When asked whether the FBI could have collected documents that would be useful in the Jan. 6 investigation, Moody said, “Well, you know, let's be clear. We are saying document disputes, because that's the information that has been put through -- put forth through new sources but the way this works is law enforcement when they need to go in, they will complete an affidavit.

“Somebody has to attest that the information therein is true. It will set out specifically the charges in which they believe there's evidence at a specific location that can prove those charges. They have to go before a neutral magistrate, which has to sign off on that,” the Florida attorney general said.

“A copy of that search warrant will be left, but always the affidavit isn’t always left, so right now you have a lot of people talking, and we don't know, and sometimes this affidavit is sealed before other proceedings in the case, which is why I go back to. In order to quell this uprising of this is a political in nature, you know, you have to have some sort of credibility with this law enforcement institution, the FBI,” she said.

“They must come out and release this to be transparent, discuss exactly why this type of action was taken when this could have been done through subpoenas. You know, federal prosecutors build cases all of the time, and they do so through subpoenas and working with lawyers. You saw in the matter of Hillary Clinton,” Moody said.

“So it's very important for the future of this country, for the trust of Americans and our institutions and in their government, the government that is presumably and is supposed to be we the people that they come out immediately and have these honest conversations with the American public,” she added.

Moody said that as a federal prosecutor, there were many times that she worked with law enforcement to do search warrants.

“You know, I don't believe anybody in Mar-a-Lago was going to start flushing fentanyl down the toilet. Think about when we use these kinds of search warrants. We are afraid that those in the residence or in the location are going to destroy evidence,” the Florida attorney general said.

“I think it's very uncommon when you're going to do this in a document dispute if that’s what this is. What I would like to see is immediately for someone to talk about even if they don't come out and give us exactly what they're doing, exactly what's in the affidavit, exactly the charges,” she said.

“If they need that for some reason for the integrity of the investigation, at least come out and say why was this the procedure used? Why were the tactics used? Why did we need dozens of FBI agents at mar-a-lago? There are a lot of questions here, and we need to start being up front with the American public,” Moody added.

She said that Mar-a-Lago raid “was done in South Florida, where folks are fearful of this.”

“They fled Venezuela. They fled Cuba because of these types of actions. We need transparency. We’ve got to do away with the secrecy for the sake of our country,” Moody concluded.