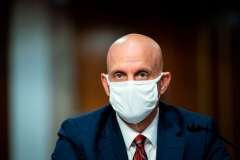 Stephen Hahn, commissioner of food and drugs at the US Food and Drug Administration (FDA), wears a protective covering during a Senate Health, Education, Labor and Pensions Committee hearing in Washington, DC, on June 30, 2020. - Fauci and other government health officials updated the Senate on how to safely get back to school and the workplace during the COVID-19 pandemic. (Photo by AL DRAGO/AFP via Getty Images)

(CNSNews.com) – FDA Commissioner Stephen Hahn told ABC’s “This Week with George Stephanopolous” on Sunday that he can’t predict when a coronavirus vaccine will be available.

Meanwhile, President Donald Trump predicted that one will be available by the end of the year.

“I can't predict when a vaccine will be available, and I just want to tell you about FDA's role in this. Yes, we are seeing unprecedented speed for the development of a vaccine, but as you know, Martha, we issued guidance this past week about vaccine development, because we want to be very clear, our solemn promise to the American people is that we will make a decision based upon the data and science on a vaccine with respect to the safety and effectiveness of that vaccine,” he said.

“That's something that's an FDA core responsibility. When those data become available -- and I hope those data are available sooner rather than later -- we will make that judgment based upon those data and that science,” the commissioner said.

When asked whether he has any evidence that Trump’s assertion that 99 percent of COVID-19 cases are “totally harmless” was an accurate statement, Hahn said, “Well, let's talk about where we are right now. We're seeing cases around the Sun Belt. We're seeing, in some cases, the situation where it's in people who are less than 35. So it's a little bit different situation than what we had back in March and April.

“We are certainly concerned at the White House, the corona task force, about this. You saw the vice president go out to those three states last week where we've reached out, trying to find out, what are the supplies, what are the resources that are needed, and we've sent teams into those states to actually help with taking care of the patients who are now with COVID-19,” the commissioner said.

When pressed to say how many cases are harmless, Hahn said, “Well, what I'd say is, you know, any case, we don't want to have in this country. This is a very rapidly moving epidemic, a rapidly moving pandemic, and any death, any case, is tragic, and we want to do everything we can to prevent that.

When asked what evidence the commissioner has to back up Trump’s claim that we’re getting close to fighting our way out of the pandemic, Hahn said, “So, first of all, you know, my heart -- I'm a front line -- or was a front-line practicing doctor about seven, eight months ago, so, you know, my well-wishes and hearts go out to those on the front line taking care of these patients.

“And we are aware of these rising number of cases, particularly in the Sunbelt, but we are in a fundamentally different place now than we were in March and April, and let me just give you an example regarding therapeutics. We now have tools for those providers to actually use, Remdesivir, steroids,” he said.

“And let me tell you also about convalescent plasma, because that is a treatment that we're looking at across the country. More than 28,000 Americans have received it. That's where you take the plasma from someone who's recovered and give that natural immunity to someone who is currently sick. We're looking at whether that's effective or not. It appears to be safe,” he said.

“And one thing I'd like, again, to tell your viewing public, … if you've had COVID-19, you have an opportunity to give back by contacting your Red Cross, by contacting a local plasma center and donating. It could save a life,” Hahn said.