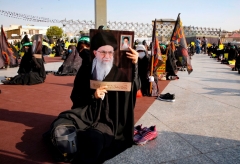 Men hold pictures of the Iranian Supreme Leader Ayatollah Ali Khamenei , during a protest against the reprinting of the cartoon of the Prophet Mohammad by French magazine Charlie Hebdo, at the Imam Hussein square in the capital Tehran, on September 10, 2020. (Photo by AFP via Getty Images)

(CNSNews.com) – FCC Chief of Staff Matthew Berry called out Twitter on Wednesday for its hypocrisy in censoring the New York Post over an article about Hunter Biden’s laptop, yet it let Iran’s Supreme Leader tweet about wiping Israel off the map.

“I think that this incident has caused a lot of people to wake up and take notice. It's just an outrageous situation when Twitter allows the supreme leader of Iran to tweet about arms resistance to the state of Israel, about wiping the state of Israel off the map, essentially committing genocide, yet the New York Post, an American newspaper founded in 1801 by Alexander Hamilton has been locked out of Twitter for seven days because they posted an article about Hunter Biden,” he said.

“That is outrageous, and I think the American people, and I think their elected representatives are waking up to the fact that this company, Twitter, is incredibly biased and discriminating against American conservatives,” Berry told Fox News’s “Bill Hemmer Reports.”

“I think it's been quite clear for years that Twitter has a viewpoint. It's a left-wing viewpoint, and it uses that viewpoint to discriminate against conservatives and conservative outlets,” Berry said.

Berry noted that people on both sides of the aisle are concerned about the impacts of Section 230, which gives social media companies broad immunity from being sued. Even Supreme Court Justice Clarence Thomas is calling for it to be looked at, he said.

“Congress has passed a law in the 1990s called section 230, which gave social media companies and other websites very broad immunity from lawsuits but there's really bipartisan concern now and whether that immunity has gone too far. You have Democrats and Republicans in Congress calling for this to be looked into. You have my boss, Chairman Pai, calling for this to be looked into,” Berry said.

“Justice Thomas just last week of the Supreme Court called for this to be looked into. You have the president and the Commerce Department calling for this to be looked into. So I think there's a broad consensus right now that this immunity is probably been interpreted too broadly and that they should not get special privileges that a newspaper doesn't get or that let's say a cable news network doesn't get,” he said.

“I do think this is one step too far, and I think unfortunately, it's not an isolated incident. It's just an incident that has gotten a lot of attention. I think, in general, Twitter - and I would add Facebook -are discriminating against American conservatives and tilting the playing field and not enforcing their standards in an even-handed manner,” Berry said.

He said that Twitter is taking such a risk because “they have a certain viewpoint.” He noted that Twitter CEO Jack Dorsey admitted that “the vast majority” of Twitter employees are “left-wing.”

“They have a left-wing outlook on the world. That's the way they see the world and end up enforcing their rules in a very skewed and biased manner,” Berry said.

“I think what Twitter cares about is its left-wing viewpoint, and I do think that if people speak up, they can alter their behavior a bit but I do believe they're a company with a viewpoint and that they use that to discriminate, and I think the events of the past week have made that abundantly clear to any rational person,” he said.

Berry agreed that Iran’s supreme leader’s tweets have gone unobstructed, and he noted that they’re not isolated incidents either.

“So I think that the values of Twitter, the viewpoint of Twitter is incredibly skewed. I think it's out of the mainstream of the American people. I think people should speak up about this and let Twitter know this is just unacceptable,” Berry added.

Ayatollah Decries ‘Filthy Zionist Agents of the US – Such as the Jewish Member of Trump’s Family’  (Sept. 2, 2020)