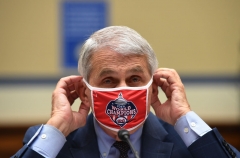 Anthony Fauci, director of the National Institute for Allergy and Infectious Diseases, adjusts his face mask as he testifies during a House Subcommittee on the Coronavirus Crisis hearing on a national plan to contain the COVID-19 pandemic, on Capitol Hill in Washington, DC on July 31, 2020. (Photo by KEVIN DIETSCH/Pool/AFP via Getty Images)

(CNSNews.com) – National Institute for Allergy and Infectious Diseases Director Dr. Anthony Fauci said Friday that “crowding together particularly when you’re not wearing a mask contributes to the spread of the virus,” but he wouldn’t say whether protests in particular increase the spread of COVID-19 or whether the protests should be limited.

During a House Oversight and Government Reform Committee hearing titled, “The Urgent Need for a National Plan to Contain the Coronavirus,” Rep. Jim Jordan (R-Ohio) asked, “Dr. Fauci, do protests increase the spread of the virus?”

FAUCI: Do protests increase the spread of the virus? I think I can make a general statement.

JORDAN: Half a million protesters on June 6 alone. I’m just asking, that number of people, does it increase the spread of the virus?

FAUCI: Crowding together particularly when you’re not wearing a mask contributes to the spread of the virus.

JORDAN: Should we limit the protesting?

FAUCI:  I'm not sure what you mean. How do we say limit the protesting?

JORDAN:  Should government limit the protesting?

JORDAN: You just said if it increases the spread of the virus. I'm just asking should we limit it?

FAUCI:  I'm not in a position to determine what the government can do in a forceful way.

JORDAN: You make all kinds of recommendations. You make comments on dating, on baseball and everything you can imagine. You just said protests increases the spread. I’m just asking should we try to limit the protests?

FAUCI:  I think I would leave that to people who have more of a position to do that. I can tell you--

JORDAN: The government’s stopping people from going to church, Dr. Fauci. Last week in the Calvary Chapel case, five liberals on the Supreme Court said it was okay for Nevada to limit church services. Justice Gorsuch said it best. He said there's no world in which the Constitution permits Nevada to favor Caesar's palace over Calvary Chapel. I’m just asking is there a world where the Constitution says you can favor one First Amendment liberty – protesting - over another - practicing your faith?

FAUCI: I'm not favoring anybody over anybody. I'm just making a statement that’s a broad statement that avoid crowds of any type no matter where you are, because that leads to the acquisition and transmission, and I don't judge one crowd versus another crowd. When you're in a crowd, particularly, if you’re not wearing a mask, that increases the spread.

JORDAN: It's a simple question, doctor. Should we limit the protests? Government is obviously limiting people going to church. Look, there’s been no violence that I can see at church. I haven't seen people during a church service go out and harm police officers or burn buildings, but we know for 63 days, nine weeks it’s been happening in Portland. One night in Chicago, 49 officers were injured, but no limit to protests, but you can't go to church on Sunday.

FAUCI:  I don't know how many times I can answer that. I am not going to opine on limiting anything. I’m just going to tell you--

JORDAN: You've opined on a lot of things. This is something that directly impacts the spread of the virus and I'm asking your position on the protests.

FAUCI: I'm not going to opine on limiting anything. I'm telling you what is the danger, and you can make your own conclusion about that. You should stay away from crowds, no matter where the crowds are.

JORDAN: The government has stopped people from going to work. In fact, just in New Jersey four days ago, Ian Smith and Frank Trombetta were arrested for opening up, trying to operate their business, their gym. They were arrested. But my bet is if these two individuals who own this gym were outside just in front of their gym, and all the people who were working out in their gym were outside protesting, they’d have been just fine, but because they were in the gym working out, they got arrested. Do you think that's okay?

FAUCI:  I’m not going to opine on who gets arrested and who does not. You get where I'm going? I'm telling you as a public health official I say crowds--

JORDAN: Do you see the inconsistency though, Dr. Fauci?

JORDAN: So you're allowed to protest millions of people on one day in crowds, yelling and screaming but you try to run your business, you get arrested, and if you stood right outside that same business and protested, he wouldn't get arrested? You don’t see any inconsistency there?

FAUCI:  I don't understand what you're asking me as a public health official to opine on who should get arrested or not. That's not my position.

JORDAN: You've advocated for certain businesses to be shut down. I'm just asking you to own your position on the protests. I haven't seen one -- we've heard a lot about hair salons but I haven't seen one hairstylist who between haircuts goes out and attacks police or sets something on fire, but we've seen all kinds of that stuff during protests. and we know the protests increase the spread of the virus. You said that.

JORDAN:  So the protests don't increase the spread of the virus?

FAUCI:  I didn't say that. You're putting words in my mouth.

JORDAN: I just want an answer to the question. Do the protests increase the spread to the virus?

FAUCI:  I don't have scientific evidence of anything. I can tell you that crowds are known, particularly when you don't have a mask to increase the acquisition and transmission. No matter what.

FAUCI:  I am saying that crowds wherever the crowds are can give you an increased probability that there’s going to be acquisition and transmission.

When Jordan concluded his remarks, Chairman James Clyburn (D-S.C.) interjected, saying, “The gentleman's time has expired, but I would just ask the gentleman to just think about his question and put it in reference to crowds that gather at political meetings, at fundraisers without masks, on an oil rig in Texas, nobody wearing a mask, nobody social distancing, but a fundraiser. Would that be problematic?”

Later, Jordan asked unanimous consent to enter into the record two stories in which Fauci said that the protests were risky and could spread COVID-19.

JORDAN: Mr. Chairman, over here. I ask unanimous consent to enter into the record a story from June 5th, 2020 underscoring what Dr. Fauci wouldn't answer today. Dr. Fauci says "Large protests taking place across the country are perfect set up for spreading COVID-19." So he said that a month ago, even though he wouldn’t say it today. So that's a story from Business Insider but also ask unanimous consent to enter into the record a June 12 story. Dr. Fauci tells ABC “Powerhouse Politics” that attending rallies, protests is risky even though today his position seems to have changed. Obviously has change on many things many times of the last several months. I would ask to enter those two articles for the record.

CLYBURN: I would yield to Dr. Fauci.

JORDAN: I didn't ask him a question and you let him respond to it I was making unanimous consent.

CLYBURN: And I'm going to run this meeting.

CLYBURN: You're telling me --