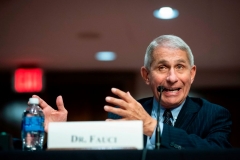 Anthony Fauci, director of the National Institute of Allergy and Infectious Diseases (Photo by AL DRAGO/AFP via Getty Images)

(CNSNews.com) - Dr. Anthony Fauci, director of the National Institute for Allergy and Infectious Diseases, said Wednesday that despite allegations to the contrary, he doesn’t think President Donald Trump distorted anything when it came to the COVID-19 pandemic or that he was downplaying it.

During an interview on Fox News’ “The Daily Briefing with Dana Perino,” White House Correspondent John Roberts asked Fauci about allegations in a Bob Woodward book that said Trump knew COVID-19 was “deadly stuff,” but he chose to downplay it. Excerpts of the book were released to the media.

ROBERTS: President Trump according to Woodward said in February that he knew how serious this was going to be, but all the way into March, he said he always wanted to play it down because he didn't want to create a panic. You were there through that whole thing. Was that the playbook or was that the president just going his own direction?

FAUCI: You know, I don't think so, John. I don't recall anything different than in our discussions that we had with the president that he said things quite similar publicly. I didn't read the book. I didn't really go over any of the text since it just came out, but you know, in my discussions and the discussions of other task force members with the president, we're talking about the reality of what was going on and then when we would get up in front of the press conferences, which were very, very common after our discussions with the president, he really didn't say anything different than we discussed when we were with him. I may not be tuned in to the right thing they're talking about. I didn't really see any discrepancies between what he told us and what we told him and what he ultimately came out publicly and said.

ROBERTS: So did you get a sense that he was or wasn't playing this down?

FAUCI: No, no, I didn't. I didn't get any sense that he was distorting anything. In my discussions with him, they were always straightforward about the concerns that we had. We related that to him. When he would go out, I'd hear him discussing the same sort of things. He would often say we just got through with a briefing with the group from the task force and we would talk about it. So it may have happened, but I have not seen that kind of distortion.

ROBERTS: So back in February according to the Woodward book, the national security adviser, Robert o'brien went in with his deputy Matt plottinger and said this is the most serious crisis that you’re going to face at least in the immediate future, because it's bad. The president seemed to acknowledge that it was bad. Then we saw him say it's going to magically go away, it's no more serious than the flu. The conversation -- I know there's not a lot you can tell us about the conversations with the task force and the president, but was it your sense that this was very serious, but that the public messaging was a little different?

FAUCI: You know, John, I really am hesitant to comment on that because I don't know in what context we're asking that question. Obviously when we would be speaking to the president, we would talk about the cold facts. He would get them. Often he would want to, you know, make sure that the country doesn't get down and out about things, but I don't recall anything that was any gross distortion in things that I spoke to him about.

ROBERTS: Right. So you were comfortable --

FAUCI: Yeah, I don't think he distorted things that I spoke to him about.

ROBERTS: So you were comfortable with the way that he was delivering the information that was discussed in the task force to the public?

FAUCI: Yeah, but remember, I'm a small frame in the big picture of what goes on. You know, I would go in, we would get Dr. Birx and I and Dr. Redfield. We talk to him about the things that were going on out there, and then we would get up. I know you were in the audience often. We would get up and go in front of the cameras and talk a little but about what the discussions were. Within that context, John, I don't think he said much different than what we said when we were in the Oval Office.

When asked about disparaging comments Woodward claims Fauci made about the president, Fauci said he “didn’t recall that at all,” and he pointed out that Woodward claims “others have said that.”

ROBERTS: I don't want to put you on the spot here. You talk about the idea that noise sort of gets in there and clouds the message. You are quoted in the Woodward book as well. According to "The Washington post," Fauci at one point tells others that the president is on a separate channel and unfocused in meetings with rudderless leadership according to Woodward. His attention span is like a minus number Fauci said. His sole purpose is to get reelected. Is that correct?