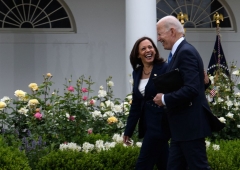 Vice President Kamala Harris and President Joe Biden leave after the President delivered remarks on Covid-19 response and the vaccination program, from the Rose Garden of the White House, Washington, DC on May 13, 2021. (Photo by NICHOLAS KAMM/AFP via Getty Images)

(CNSNews.com) – Fox News contributor Dr. Nicole Saphier pointed out Thursday that President Joe Biden’s ultimatum on mask wearing if you’re not vaccinated leaves out people who have already had COVID and have natural immunity as well as children.

Saphier told Fox News’s “Hannity” that Biden’s tweet directing people to “get vaccinated or wear a mask until you do” was “dangerous.”

As CNSNews.com reported, the president announced CDC guidance Thursday that vaccinated people can go without masks indoors even when around people who are not vaccinated.

“I can tell you it’s a great step forward that the CDC is recognizing that the risk of transmission and severe disease and death after vaccination is exceedingly low so masks should come off, not just outdoors but indoors, as well. I will say President Biden put out a dangerous tweet a few hours ago,” Saphier said.

“He said essentially if you get vaccinated, great. If you're not getting vaccinated, you have to wear a mask until you get vaccinated, and the choice is yours. That’s dangerous, and let me tell you why that’s also neglecting science. What are about the people covered with natural immunity? What about children?” she said.

“What about people who have contraindications or just choosing not to get the vaccine? That is completely neglecting a huge population of Americans, and I think that’s dangerous. That is completely ignoring what the actual definition of herd immunity is,” Saphier said.

“It is about enough of the population that gets vaccinated, and I can tell you with about 60% of American adults with at least one vaccine dose now, and probably over 100 million Americans who have recovered from COVID-19, we are quite close to that herd immunity, and so I think it is dangerous to say that you need 100% of people to be vaccinated to take off that mask,” Saphier said.

“That is not true, and the CDC is going to have to correct that,” she added.

Fox News’s Judge Jeanine Pirro questioned why the CDC chose to make the announcement on masks when it did.

“Why today?” she asked. “We have known for six months that if you’re vaccinated, and you’re two weeks after the last shot, that you were immune, and in fact, Joe Biden came out a few weeks ago and said, you know, if you are vaccinated, you don't have to wear the mask in public, and yet, he put his mask on, and when the reporter said to him, you know, why are you wearing a mask? He said well, it’s a patriotic duty.

“The messages have been ridiculous, and today, I think it’s very curious that after he had a town hall last night on MSNBC, or as you call it, DNC, with Fauci and the surgeon general, that they didn’t even address this issue, so the question is why, when we’ve all known all along that if you took the vaccine, you are okay, you don't need to wear a mask, and the truth is, its distraction week for team Biden,” Pirro said.

“What we've got is we've got an economy that’s about to face incredible inflation. You’re open about what’s going on in Israel and with Hamas. Then we've also got a pipeline disaster where the president makes believe he doesn't even know if the ransom has been paid, and then we've got a border that’s in a mess, so this is all theater,” she said.

“I mean, what they did today, is they said, let's have a happy dance today. Let's tell America they don't have to wear the mask, and everyone will be happy, and life is good in America, and we can smile again. It’s so simplistic, it's ridiculous,” Pirro said.

“He ought to be worried about the fact that his energy secretary has admitted that transporting fuel through the pipeline is one of the best ways of doing it, and so did John Kerry. He said the same thing. So, you know, Rand Paul was right. This is all theater. Let’s just you know move on from this,” she added.