Donalds: ‘In Any Corporation … the Board of Directors Can Call a Vote at Any Time’ 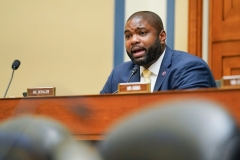 (CNSNews.com) – Congressman-Elect Byron Donalds (R-Fla.), who was nominated to be speaker of the House, said Wednesday that it’s not unreasonable for House Republicans to demand the requirement that one person be able to raise a motion to vacate the chair, because it’s a rule that existed for 100 years before then-House Speaker Nancy Pelosi (D-Calif.) changed the rules.

During an interview with Fox News’ “America Reports,” Donalds said he disagreed with the premise that one can’t lead or govern with the option of one person being able to raise a motion to vacate the chair hanging over their head all the time.

“The motion to vacate, I know this is really inside baseball for a lot of the American people,” Donald said. “Let me explain. It has actually been the rule in Congress more than 100 years any member could do that. Nancy Pelosi is the person that got rid of that rule. So as Republicans are we saying that we have to live under the rules of Nancy Pelosi, that's the only way to govern Washington? I think that’s not appropriate at all.”

Roberts pointed out that Rep. Kevin McCarthy (R-Calif.) offered the option of changing the rules to require five members to vote to vacate the chair.

When asked why that’s not good enough, Donalds said, “Because again, any member who’s duly elected should have the ability to call that question.

“The real question is, is that if you are leading our conference and really leading the House of Representatives and you are doing that job, you shouldn't be concerned about the ability of one member to bring a motion. That should not be the concern, and that's something I have communicated directly to a lot of people,” the congressman said.

“The motion to vacate is something that is a simple tool available to members, but it's not really used by members. It’s only been used twice in the last 100 years. It does speak more loudly to concerns about the ability to effectively lead the chamber if that's what the concern is. It shouldn't be a concern, and this is the thing that I want to make sure the American people understand,” he said.

“In any corporation you got, if the head guy or lady is not doing the job, the board of directors can call a vote at any time. We all know this to be true. If it's good in business, it's definitely good here on Capitol Hill,” Donalds said.

When asked if this is a referendum on McCarthy’s performance in the midterm elections and if there had been a red wave and the GOP gained a massive majority in the House, would members be withholding their support of McCarthy, Donalds said, “Probably not because I think that would have changed the dynamics of how you count votes, but let’s be very clear. Republican voters across the country have not been happy with party leadership across the board.

“You saw the Senate. Ronna McDaniel is having a challenge from Harmeet Dhillon whereby who is going to be the next head of the RNC. and there’s a leadership challenge here in the House of Representatives,” the congressman said.

“These leadership challenges are a good thing for our party, and they’re actually a good thing for America. The days of just power by acclimation, those days are over. It needs to be earned, and that’s the thing that people need to understand and be communicated effectively,” he said.

Donalds said that the path to speaker “is very difficult right now” for McCarthy. “But look, at the end of the day, what I want to make sure is that we elect a speaker of the House and we go on and accomplish the business the American people sent us here to do. We know the issues. We have a porous border.

“We’re massively in debt. Purchasing power for the American families has been crippled under this administration, and we want to fix all those problems, but one of the core issues we have is Washington is broken,” he said.

“The House does not function, and so we want to see a process where power is actually devolved back to the members of Congress so that they can do the job on behalf of the people who sent them here so we can actually start the process of fixing the issues that are ailing every American. Now coming back to the speakership vote, my intentions is to make sure we get a speaker elected and that we start this process. It may be me. It may not me, but those are my intentions,” the congressman said.

Donalds said that he spoke briefly to McCarthy this morning, but he wouldn’t share the details of their conversation.

Right now there's a lot of members on the floor. I'm quite sure all the cameras see it. You have members in active dialogue right now as we speak. Take a step back. The one thing that is necessary for this body to function is active dialogue among the members and you are seeing it now on the House floor.

That will only yield the best results for the American people overall, and so now what we are going to do, is we’re going to have more meetings, more discussions and figure out a pathway for Kevin to become speaker or anyone else to become speaker, but That's the job that needs to be done.

We want to see that leadership actually reflects where the American people are and that leadership is something that is earned here in the nation's capital, not just given, and that's not an anti-Kevin statement. That is an indictment of the political process here in Washington, D.C.

Donalds disagrees with those who say that Republican holdouts against McCarthy are delaying and even discrediting all the work that the Republican conference wants to get done in the next two years.

I think that's just out of hand. That's actually thought processes and points that just want to continue with the way this place works and I think that’s not going to be in the best interest of all of the Americans, whether they are Republicans or Democrats. And so I think it's ok to have a little bit of patience. It’s only day two. The sun rose this morning. The sun will rise tomorrow in America.

The American people are working and taking care of their families, and so we are going to get this business done on Capitol Hill and get to the job of investigation, securing our border, getting our spending under control, and the other priorities of the Republican Party.