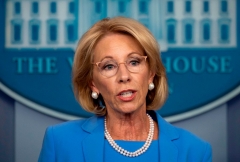 Secretary of Education Betsy Devos speaks during the daily briefing on the novel coronavirus, COVID-19, in the Brady Briefing Room at the White House on March 27, 2020, in Washington, DC. (Photo by JIM WATSON/AFP via Getty Images)

(CNSNews.com) – Education Secretary Betsy DeVos told Fox News on Thursday that by President Donald Trump threatening to cut funding for schools that don’t open in the fall, he was not suggesting pulling funding from education.

Instead, he was saying he would allow families to take the money and find schools in their area where their children can get an education.

“American investment in education is a promise to our students and families, and if schools aren't going to reopen, we are not suggesting pulling funding from education, but instead allowing families take, let families take that money and figure out where their kids can get educated if their schools are going to refuse to open,” DeVos said.

“In Germany, Denmark, Norway, Sweden and many other countries, SCHOOLS ARE OPEN WITH NO PROBLEMS. The Dems think it would be bad for them politically if U.S. schools open before the November Election, but is important for the children & families. May cut off funding if not open!” Trump tweeted on Thursday.

DeVos said that “there’s a lot of risk for kids not going back to school,” including not being able to report child abuse.

“We know for a fact that child abuse has not been reported at the levels before because kids in school are often observed by the adults and those incidents taken to the right authorities,” the secretary said.

DeVos said that the Centers for Disease Control and Prevention (CDC) never suggested closing schools during the pandemic in the first place, and the CDC has laid out recommendations for schools to safely reopen.

When asked what to do about teachers who may have pre-existing conditions are may be more at risk for the coronavirus, DeVos said, “Those are certainly considerations for each school building to be taking into account, and we know that those who are vulnerable to the disease need to have special consideration and protections, but that doesn't mean we don't take steps forward and that we don't commit to getting schools reopened.

“The consideration of catching and/or spreading the virus is one consideration but also, kids’ mental well-being and social, emotional development and growth and not to mention the academic part of school. The most important part of going to school [is] to get an education. There are many different factors to be weighed here, and the point is that kids have to get back in school. Families need them back in school,” she said.

DeVos said that “obviously, there are going to be considerations in certain locations” which are considered hotspots for COVID-19.

She pointed to the American Academy of Pediatrics, which “strongly advocates that all policy considerations for the coming school year should start with a goal of having students physically present in school.”

“I also want to call attention to what the American Academy of Pediatrics said, and they said schools should be reopened. They have taken into account the whole child. They are looking at it as physicians who take care of children on a daily basis, and their posture is, kids have got to get back in school. They need to be together with their peers and they need to continue learning for their own health and well-being,” DeVos said.

“So there are going to be exceptions for flare-ups here or there certainly, but we shouldn’t be paralyzed across the country or across the state because of one location. Plan for schools to be fully opened and fully operational and have contingency plans if you need to move to a remote situation because of a flare-up or because of a certain situation in a specific community, but this is not ubiquitous across the country,” she said.

The secretary said the White House and coronavirus task force are “absolutely” on the same page about the need to reopen schools.

“We know that the best place for kids to be to continue in the fall is back in school and back learning, back with their peers, back with their teachers. It can be done safely. We need look no further than other countries who have reopened their schools and have had great success in doing so,” the secretary said.

“This has to happen for families across the country and fully operational and fully open may mean something different for a family that has a compromised child, but the point is, kids have got to get back to learning, and education leaders can solve these problems and can solve the question of how to do it safely,” DeVos said.

“There's plenty of suggestions and guidelines, and frankly, there’s a lot of creativity in the education world about how to do things differently. This doesn't have to look exactly like it did a year or two ago. Think creatively about how you do it, but do it,” she said.

The secretary warned that there’s a “tendency on the part of some to be fearful of taking that next step toward where we need to go to get schools reopen.”

“There are no excuses for sowing fear and for making excuses when there are clearly safe ways to do things and we can make those decisions, take those steps forward to getting schools fully open, fully operational and serve the families that we’ve made the promise to,” DeVos said.