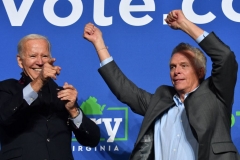 (CNSNews.com) – Democratic pollster Cornell Belcher predicted Sunday that if former Virginia Gov. Terry McAuliffe, (D) loses the governor’s race to Republican Youngkin, it will be “catastrophic” for Democrats, because the last time a Democrat lost Virginia, they lose 60 seats in the U.S. House of Representatives.

“If Terry McAuliffe loses, you know, ‘Katy, bar the door.’ I mean, it's the deluge,” Belcher said during a roundtable discussion on NBC’s “Meet the Press” on Sunday.

“You think it's that catastrophic?” NBC host Chuck Todd asked.

“Because you have the White House saying, ‘Look, if McAuliffe loses, it's not on us.’ McAuliffe is saying, ‘Get in a room and figure this out,’ and I've been speaking to Virginia voters who say they are sick of the intransigence. So it's hard to say that what's happening in Washington won't impact the race.”