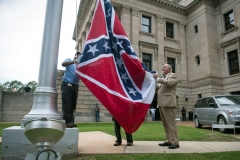 “We must always remain focused on what unifies us: our sworn oath to the Constitution and our shared duty to defend the Nation. I am committed to fielding the most powerful military force the world has known by strengthening the bonds of our most valuable resource - our people,” the secretary said in an unclassified memo dated for Thursday.

“That is why we honor the American flag, which is the principal flag we are authorized and encouraged to display. The flags we fly must accord with the military imperatives of good order and discipline, treating all our people with dignity and respect, and rejecting divisive symbols,” he wrote.

In the memo, Esper does not specifically reference the Confederate flag, but he does provide guidance on the “public display or depiction” of flags at the DoD. The memo details what flags are allowed to be displayed.

“Consequently, in addition to the American flag, Service members and civilian employees are authorized to display or depict representational flags that promote unity and esprit de corps, including:

The guidelines apply to DoD “work places, common access areas, and public areas, including, but not limited to:

“The public display or depiction of unauthorized flags in museum exhibits, state-issued license plates, grave sites, memorial markers, monuments, educational displays, historical displays, or works of art, where the nature of the display or depiction cannot reasonably be viewed as endorsement of the flag by the Department of Defense, is not prohibited,” the memo stated.