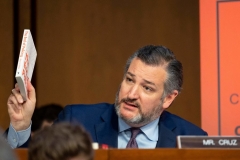 (CNSNews.com) - Sen. Ted Cruz (R-Texas) said Sunday that the bill that Senate Majority Leader Chuck Schumer (D-N.Y.) wants to bring back to codify Roe v. Wade is a bill that failed the last time they voted on it, and it would strike down partial-birth abortion, restrictions on late-term abortion, restriction on taxpayer funding, and strike down parental consent and parental notification laws.

“Well I think it’s likely we’ll have a bill either this week or next, and Schumer in all likelihood will bring back the same bill that we voted on earlier. That bill failed. It's interesting he calls it a bill to codify Roe versus Wade, but that's not in fact what the bill does. It is a radical abortion bill which sadly reflects where today's Democrats are,” Cruz told Fox News’ “Sunday Morning Futures.”

“It would strike down parental consent and parental notification laws, and the amazing thing is that today's Democratic Party on the issue of abortion has gone to the extreme left like they've done economics embracing socialism, like they've done the border embracing or open borders. You take an issue like late term abortion,” he said.

“Only six percent of Americans support abortion all the way up to the moment of birth. That is the position of today's Democratic Party. That is what we’re going to vote on. It's going to fail. He’s not going to get the 60 votes he needs. He knows that,” Cruz said.

“That is satisfying the left-wing constituency in the Democrat Party, and I gotta to say, Maria, we are a long, long way from when Bill Clinton was president. In the State of the Union, he said he wanted abortion safe, legal and rare,” the senator said.

“Now I didn’t agree with that statement then, but he was at least recognizing abortion is something he wanted rare. Today’s Democratic Party doesn’t believe that. They openly celebrate abortion as a wonderful thing,” he added.

The draft Supreme Court opinion that was leaked that would overturn Roe v. Wade was careful, scholarly, and historical, Cruz said.

The draft opinion - we don’t know what the final opinion will be - but the draft opinion was written by Justice Sam Alito, and it's a masterful opinion. It is careful. It is scholarly. It is historical.

It walks through how for the first 185 years of our nation’s history the question of abortion was decided by elected legislatures, decided primarily at the state level, and listen, we all recognize abortion is an issue that is deeply personal, that is deeply emotional, and it’s an issue on which Americans are sharply divided.

“There are very, very different views on what the appropriate rules should be, and for the first 185 years of our nation’s history, we resolved those in the elected legislatures. Then in 1973, seven unelected lawyers wearing black robes said, ‘You silly voters. You don’t get to decide. We know better than you, and we are going to decree the answer for the entire country,’”

“I think that decision in Roe really caused an enormous amount of anger and frustration for the tens of millions of people who passionately care about this issue have been engaged in this issue. You had these unelected judges saying, your views don't matter, and there's no outlet for you to fight for them.

If in fact the court does overturn Roe, as you said, the result is not that abortion is illegal across the country. The result is that it’s up to the people. It’s up to democracy. Now that will mean in bright blue states, in states like New York and California, at least for the immediate future, we’ll continue to see unlimited abortions on demand, because that’s where their elected politicians are.

In redder states like my home state of Texas, we’ll see some meaningful restrictions, and the restrictions will vary state-by-state, and they will reflect the values and the mores of the citizens of each state. That's exactly how the framers of the Constitution intended it, and Justice Alito’s draft opinion explains that this returns the issue to the people so that we the people can decide what the right answer is.