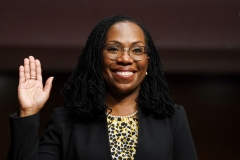 Ketanji Brown Jackson, nominated to be a US Circuit Judge for the District of Columbia Circuit, is sworn in to testify before a Senate Judiciary Committee hearing on pending judicial nominations on Capitol Hill in Washington, DC on April 28, 2021. (Photo by KEVIN LAMARQUE/POOL/AFP via Getty Images)

Jackson currently serves on the U.S. Court of Appeals for the D.C. Circuit.

She would be the first former federal public defender to serve on the Supreme Court if confirmed.

“If media reports are accurate, and Judge Jackson has been chosen as the Supreme Court nominee to replace Justice Breyer, it means the radical Left has won President Biden over yet again,” Sen. Lindsey Graham (R-S.C.) said in a statement Friday.

“The attacks by the Left on Judge Childs from South Carolina apparently worked. I expect a respectful but interesting hearing in the Senate Judiciary Committee. The Harvard-Yale train to the Supreme Court continues to run unabated,” he said.

“Her record from the beginning of her career shows hostility to religious liberty, free speech, and other constitutional rights. The American people do not want a liberal extremist on the Supreme Court. If confirmed, Judge Jackson’s judicial activism will place the constitutional rights of all Americans in jeopardy,” Shackelford said in a statement.

"Maybe the only promise Joe Biden has kept is his pledge to nominate a liberal, activist judge to the Supreme Court. Ketanji Brown Jackson is exactly that: a radical, left-wing activist who would rubberstamp Biden's disastrous agenda,” she said in a statement.

“By picking Jackson, Biden put far-left special interests ahead of defending Americans’ rights and liberties. The Republican National Committee will make sure voters know just how radical Jackson is and remember at the ballot box in November," McDaniel added.

The pro-life group Susan B. Anthony list pointed out that in 2001, Jackson co-authored an amicus brief in McGuire v. Reilly supporting a Massachusetts law that created a floating “buffer zone” preventing pro-life sidewalk counselors from approaching to speak with women outside of abortion facilities. Her clients included: NARAL, the Women’s Bar Association of Massachusetts, the League of Women Voters, and the Abortion Access Project of Massachusetts.

Joe Biden is fulfilling his promise to only appoint justices who support the Roe v. Wade regime of abortion on demand up to birth – a policy so extreme only a handful of countries in the world hold it, including North Korea and China. Ketanji Brown Jackson is backed by many of America’s most radical pro-abortion groups.

She is on record opposing the free speech rights of pro-life advocates pleading to save lives outside abortion centers and supporting the false claim that abortion is ‘health care.’ We have no doubt she will work with the most pro-abortion administration in history to enshrine abortion on demand nationwide in the law.

With the Court’s decision in Dobbs expected this summer, the stakes have never been higher in the fight to protect unborn children and their mothers and let the people decide this issue through their elected representatives, not unelected judges.

The overwhelming majority of Americans reject the Democrats’ extreme agenda that includes late-term abortions when unborn children can feel pain, dismemberment abortions, lethal discrimination abortions, and more. In this critical election year, SBA List will work tirelessly to ensure that voters remember this when they go to the polls and that abortion extremists face political consequences.