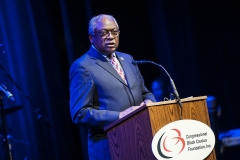 (CNSNews.com) - House Majority Whip James Clyburn (D-S.C.) said Sunday that people should be able to present their voter registration card as a form of voter ID.

During an interview on CNN’s “State of the Union,” host Dana Bash pointed out that Sen. Joe Manchin (D-W.Va.) has a plan that requires an ID or utility bill to vote in the election, and Democrats like Stacey Abrams say they could get on board with that.

“We are always for voter I.D. We are never for disproportionate voter I.D. When you tell me that you got to have a photo I.D., and a photo for a student for an activity card is not good, but, for a hunting license, it is good, that's where the rub is,” he said.

“I don't know of a single person who is against I.D. ing themselves when they go to vote, but we don't want you to tell me my I.D. is no good because I don't own a gun and I don't go hunting,” Clyburn said.

“No, I'm drawing the line at inequitable I.D., any kind of I.D. that you got. People, if you're 94 years old, you don't drive anymore, but you're still watching the news every day, and you want to keep up, you want to vote, and you don't have a photo I.D., then you ought to be able to vote with whatever I.D. that you have. One being your voter registration card,” Clyburn said.