Cammack: Single Adult Male Migrants Cross the Border with No ID, Given a Notarized Paper That Says ‘I Am Who I Say I Am’ 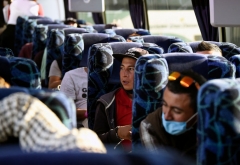 Migrants heading in a caravan towards the US wait on board a bus at the "House of the Pilgrim San Juan Diego" in Mexico City, on December 22, 2021. (Photo by ALFREDO ESTRELLA/AFP via Getty Images)

(CNSNews.com) – Rep. Kat Cammack (R-Fla.) said Wednesday that the groups of single adult male migrants being transported to other parts of the country are “not the family units” that the Biden administration “has played in front of cameras, saying these are people fleeing desperate situations.”

Instead, many don’t undergo background checks or even have identification. They just get “a notarized piece of paper” saying “I am who I say I am,” and they’re able to board a plane and go anywhere in the United States, the congresswoman told Fox Business’s “Mornings with Maria Bartiromo.”

“This is not the family units that is the administration has played in front of cameras, saying these are people fleeing desperate situations. No, there are a lot of young single-adult males that have crossed, and I personally have seen them at the border myself. The background checks are certainly not sufficient,” she said.

“Many of these people are coming with zero ID, and they get a notarized piece of paper at the border that says I am who I say I am, and they are able to board a plane with no ID that, of course, all Americans citizens have to use to get on a plane or go basically anywhere in the United States. However, this group of people is exempt, and this, again, just points back to this administration's total disregard for the law,” Cammack said.

“There's zero consequences, and the most disturbing thing that I've seen thus far is the fact that we have less than 300 people that have been logged into the system for the Remain in Mexico policy, which, of course, the courts ruled the administration had to enforce and uphold months ago. We are in an invasion at this point here on our southwest border, and the administration is doing nothing to curb this,” she added.

Host Maria Bartiromo asked Cammack how the Biden administration can say they are restarting the Remain in Mexico program when there are only 267 migrants who have applied but 2 million migrants were apprehended crossing the border last year.

“That's the thing, Maria. They can't. This is absolutely a total failure, and it is a crisis that was generated by the Biden administration. Yesterday, Biden is getting ice cream. Meanwhile, on a daily basis in just one of the nine sectors, we’re seeing upwards of just 2,000 people coming across and being apprehended, and as you just hit on, that doesn't include the gotaways or the known terrorists, the known individuals that are on the terrorist watch list,” Cammack said.

“This is why we continually say every single town in America is a border town, because they are getting on buses and planes and trains and coming to a town near you, and it is at your expense as an American taxpayer, because they've already expended the $100 million out of FEMA's pocket that has gone to pay for all of these flights and all of this travel. It is absolutely shameful, and it has got to end, because it's putting every single American at risk,” she said.

“And I think she feared more than anything that she was going to be a lame duck speaker, and if there's anything that we know about Nancy Pelosi it’s that she revels in control, because that is what her agenda, that is what Biden's agenda is all about - dependency and control, and she has been losing grip on her caucus. We know that she has seen the writing on the wall with the mass number of retirements. This is gonna be a red wave that nobody has seen, and she is holding on for dear life at this point,” she said.