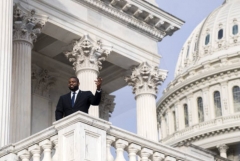 (CNSNews.com) – Rep. Byron Donalds (R-Fla.) is accusing the Congressional Black Caucus of discriminating against him because he’s a Republican and denying him membership.

During an interview Thursday with CNN’s “New Day with John Berman and Brianna Keilar,” host Keilar read a statement from the CBC about their decision:

The Congressional Black Caucus remains committed to fighting for issues that support Black communities, including the police accountability bill, protecting voting rights and a jobs bill that helps our communities. We will work with those who share our values and priorities for the constituents that we serve.

“You heard that statement from the CBC, and what's implicit but pretty clear here is that in that statement, they are basically saying they don't think you share their values and priorities for the constituents they serve, and I wonder what your reaction is to that,” Keilar said.

Donalds said he was initially invited to join the CBC when he became a new member of Congress, but has yet to hear from them directly about the reason behind their decision to block him from joining. He said he has a perspective that he feels will be helpful to the organization.

“My reaction is pretty simple. First, I heard about this report yesterday when Buzzfeed, I think is the one that broke the article. We have not really heard much from the CBC since they asked me when I came in as a new member in the 117th whether I would join or not. It's important for your viewers to understand that when I served in Florida's Legislature, I was a part of the Legislative Black Caucus for four years,” the congressman said.

“I've actually been to a couple of the CBC conferences in Washington, D.C. I'm a poor kid from Brooklyn, New York. I’m 42 years old. I've been able to be successful in my life, so whether it's talking about jobs or, yes, even voting rights or anything the CBC wants to talk about, I have a perspective of being a 42-year-old black man who has come up in America after a lot of the battles through the civil rights movement that I think would actually be helpful and a helpful perspective to the CBC,” he said.

“Whether they want to take advantage of that is really up to them, but it's something that I've actually expressed interest in joining. I think having a wider range of discussions from all sides of the political framework is important, not just for black America but all America,” Donalds said.

“You have questioned the election, the veracity of the election. The 2020 election was verifiably secure, but this questioning of the election, which many Republicans have done, is the basis, really, for all of the bills that we have seen across so many states that if passed will effectively reduce voting access of black Americans. Do you think that that is something that might be incongruent with the mission of the CBC?” Keilar asked.

“First of all, what’s gone on with the 2020 election has nothing to do with this at all. Number two, I would say if you actually look at the bills that have been passed in Florida, Georgia, actually black Americans and all Americans, whether you live in those states, have more access to the ballot, not less,” Donalds said.

“Those are the facts, because I've read both bills, and number three, again, I'll say it like I said before. I'm 42 years old. I grew up in Brooklyn, New York. I come from a single parent household. I know what it is to actually have to grow up coming out of the inner city in today's America, because I've done it,” the congressman added.

“I think those perspectives are helpful. Whether the CBC wants to take advantage of that is up to them, but I'm here to tell you and your viewers and frankly the entire country that I'm willing to be a part of that conversation, because it is important as we navigate our country forward that we have people who have all kind of political perspectives, not just one,” he said.

Keilar disagreed, saying that voter integrity bills in those states will decrease access to voting for the black community, and she cited “analyses” by The Washington Post and Houston Chronicle.

“Furthermore, you have defended President Trump for-- you’ve said he's done enough when it comes to rebuffing ideas about white supremacy, but I do want to listen to some of his prominent comments on the subject of race to get your perspective,” Keilar said.

She played a montage of clips from former President Donald Trump.

“Do you think that your defense of a person that said things like that might be incongruent with the mission of the CBC?” Keilar asked.

DONALDS: First of all, whatever the president said in the past has nothing to do with this discussion at all. I think it’s important to understand that--

DONALDS: Please don't cut me off. I have not cut you off in this interview. Please do not do that to me. Thank you. As a black man in America, I'm allowed to have my own thoughts on who I choose to support and who I choose not to support. I think that it's important whether you're talking about the Congressional Black Caucus or the Florida State Legislative Black Caucus or the National Caucus of State Black Legislators, organizations I have been a part of in the past.

My support of President Trump has been consistent, but at the same time, I’ve had the ability to advocate for issues, ideas, proposals and funding that have helped the black community in my state. You are talking to somebody who my first three years in college was at Florida A&M, an HBCU. My support for President Trump, whether it's for or against, is irrelevant.

That has nothing to do with this discussion. This is whether the ideology of somebody who is conservative is welcome in the Congressional Black Caucus. It's really that simple. So to bring up President Trump and try to make this about him does not matter. It's irrelevant. It has nothing to do with the situation at hand. The question is whether the CBC will let me join.

There have also been a number of African-American Republicans who have said, no, they don't want to be in the CBC when they've been invited. So there have been Republicans in the CBC, and so I think that's why I'm asking you about this, because it does appear to be relevant. I hear you saying that Trump is a thing of the past. Facts would differ with that assessment.

Can you address that because that does seem to be at the root of the issue that the CBC seems to have with you which is of concern to you because you do have perspectives that you would like to bring to the CBC?

DONALDS: That's not really a question for me to ask. It's for the members of the CBC to address. It's their organization. It's their caucus. If that's a problem for them, they should come on CNN and address that with you. All I'm saying is that I have expressed interest in joining. I've been very consistent in that. Friends of mine who are Democrats from the Florida Legislature have asked me if I would join.

I've told them, yeah, but I'm waiting to hear from the CBC. If that's their position, they should state that as opposed to just saying no comment, and understand, I'm not trying to challenge them or make this an issue. Like I said, my office didn't ask for this article to be written. It was written by reporters and came out and I'm here with you today, but if my positions and my support of President Trump is a problem for them, let them state that on the record.

As far as I'm concerned, I do have policy ideas. I have a business background. I'm here in politics today. I want to contribute. I think my ideas, whether it's voting or access to education or a growing economy would help black America as well as all America, and I want to be a part of that conversation. If they choose not to hear my voice, I can't help that.

DONALDS: Well, no, I mean if that's what it is, then I would say we're members of Congress. Let's sit down and have a meeting and discussion. I have no problem going into the CBC meeting and having this robust discussion as members of Congress. That's something I always do. My door is always open to have any conversation no matter how easy or how hard and difficult. If that's their position, I would prefer to hear it directly.

The thing that I find to be a little off-putting is that it drops in some article that they have no comment but this is their concerns. Let's have that conversation. We can do it in the speaker's lobby. We can do it on the House floor. We can do it in anybody's office. They can come to my congressional office or we can do it in any meeting room in Washington, D.C., at any time. I'm here. I’m open to talk.

I’m willing to talk. I have different perspectives when it comes to public policy but I think when it comes to quote/unquote values, the values that I espouse is making sure that all Americans have the ability to thrive and prosper and that black Americans have an opportunity to do that as well. That's where I am, and that's what I stand on.