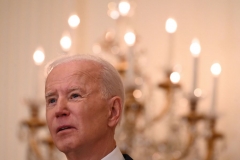 President Joe Biden answers a question during his first press briefing in the East Room of the White House in Washington, DC, on March 25, 2021. (Photo by JIM WATSON/AFP via Getty Images)

(CNSNews.com) – President Joe Biden said that when he was vice president and was called on to handle border security, he identified the reasons why people were leaving Central American countries for the United States, and in one case, one reason was because people were getting attacked in the streets.

His solution? Hire a contractor to put lighting in, and violent crime was significantly reduced, thus leading to fewer people leaving, Biden said.

During his first formal press conference since taking office, Biden was asked whether his messaging is the reason why so many unaccompanied minors are fleeing to the United States.

“You just listed the reasons that people are coming, talking about in-country problems, saying that it happens every year. You blamed the last administration. I just got back last night from a reporting trip to the border where I met 9-year-old Josef who walked here from Honduras by himself along with another little boy,” ABC News White House Correspondent Cecilia Vega said.

“He had that number on him, and we were able to call his family. His mother says that she sent her son to the country, because she believes that you are not deporting unaccompanied minors like her son. That’s why she sent him alone from Honduras. So sir, you blamed the last administration, but is your messaging and saying that these children are and will be allowed to stay in this country and work their way through this process encouraging families like Josef’s to come?” she asked.

That's why I’ve asked the vice president of the United States yesterday to be the lead person on dealing with focusing on the fundamental reasons why people leave Honduras, Guatemala, El Salvador in the first place. It's because of earthquakes, floods..

It's because of lack of food, it's because of gang violence, it's because of a whole range of things that when I was vice president, had the same obligation to deal with unaccompanied children, I was able to get it slowed up significantly by working with the heads of state of those communities to do things like, in one of the major cities the reason people were leaving is they couldn't walk the street because their kids were getting beat up or shot or in gang violence.

What I was able to do is not give money to the head of state, because so many of them are corrupt, but I was able to say okay, you need lighting in the streets to change things, I’ll put the lighting in. We got a contractor. We got the type of lighting. We paid directly to the contractor, did not go through the government and Violent crimes significantly was reduced in that city.

Fewer people sought to leave. When this hurricane occurred – two hurricanes - instead of us going down and helping a major way so that people would not have a reason to want to leave in the first place, because they didn't have housing or water or sustenance, we did nothing. We’re going to do a lot in our administration.

We’re going to be spending that $700 million plus a year to change the life and circumstances of why people leave in the first place. That mother did not sit around on the kitchen table and say, you know, I got a great idea, the way I'm going to make sure my son gets taken care of is I'm going to put a -- how old was he or she?

BIDEN: A nine-year-old., I'm going to send him on a thousand-mile journey across a desert and up to the United States, because I know Joe Biden’s a nice guy and he’ll take care of him. What a desperate act to have to take. Circumstances must be horrible. So we can do something about that. That’s what the vice president’s going to be doing - what I did.

When President Obama asked me to come and deal, I was in Turkey at the time. He said, you've got to come home and take care of this. So we put together a plan, and it had an impact, and so the question here is whether, how we go ahead and do this, what we do. There’s no easy answer.

Vega followed up by asking the president whether he wants to see unaccompanied minors stay in the country or eventually be deported.

“Well, the judgment has to be made whether or not -- in this young man's case, he has a mom at home. There's an overwhelming reason why he’d be put on a plane and flown back to his mom,” Biden said.

Vega also asked the president about the conditions at overcrowded Border Patrol facilities like the one in Donna, Texas.

VEGA: Sir, you mentioned circumstances must be horrific. The Customs and Border Protection facility in Donna, Texas - I was there - is at 1556% capacity right now with mostly unaccompanied minors. There are kids that are sleeping on floors. they are packed into these pods. I’ve spoken to lawyers who say that some of these children have not seen the sun in days. What’s your reaction to these images that have come out from that particular facility? is what's happening inside acceptable to you? And when is this going to be fixed?

BIDEN: That's a serious question, right? If it's acceptable to me? Come on. That's why we are going to be moving a thousand of those kids out quickly. That’s why I got Fort Bliss opened up. That’s why I’ve been working from the moment this started to happened to try to find additional access for children to be able to safely, not just children, but particularly children, to be able to safely be housed while we follow through on the rest of what's happening. That is totally unacceptable.