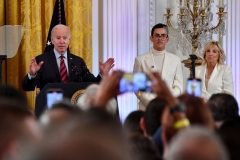 “As I promised when I got elected, I wanted my administration to look like America across the board, and we’ve done that - a record number of out and proud appointees at every single level of our government - and as I said, Secretary Buttigieg, who needs no introduction, is doing an excellent job of rebuilding America, and I mean that in the literal sense and not just in terms of what he’s doing at transportation, but he’s helping rebuild pride in America,” he said.

Biden cited his press secretary Karine Jean-Pierre, the first lesbian to serve in that position, as an example, as well as Assistant Secretary of Health and Human Services Admiral Rachel Levine and Assistant Secretary for Readiness at the Department of Defense Shawn Skelly as “the first and second transgender Americans to be Senate confirmed in American history.”

“Let me say as commander-in-chief, I’m proud to have ending the un-American ban on transgender Americans serving in our military, and just last week, the Department of Defense announced new policy allowing HIV-positive servicemembers to finally be able to be deployed and commissioned,” the president said.

“I’m also proud to have signed an executive order on my first day in office to combat discrimination against LGBTQL - I - excuse me + Americans in housing, in health care, in education, employment, financial services and the criminal justice system - the first thing I signed,” he said.

"No one knows better than the people in this room that we have a lot more work to do, a lot more work to day. I don’t have to tell you about the ultra-MAGA agenda attacking families and our freedoms - 300 discriminatory bills introduced in state across this country,” Biden said.

“In Texas, knocking on front doors to harass and investigate parents who are raising transgender children. In Florida, going after Mickey Mouse for God’s sake. That’s striking close to home, but think about this. All of you in this room know better than anyone that these attacks are real and consequential for real families, for real families,” he said.

“Just look at what happened in Idaho last weekend - 31 white supremacists stopped just before they reached the Pride celebration, where they apparently planned to unleash violence on people gathering peacefully in a show of their pride. I’m grateful for the swift response of law enforcement, and they responded,” the president said.

“Right now there are young people sitting in their bedroom, doors closed, silent, scrolling through social media, staring at the ceiling, wondering if they’ll ever be loved, ever marry, ever have a family and be accepted by their own families,” Biden said.

“I found my friends, some of my gay friends. I’ve asked them, ‘What was it like as a kid?’ I can’t imagine what it was like, locking yourself in that room and wondering, just staring at the ceiling, just wondering,” he said.

The president said that his “message to all young people” is “Just be you.

“You are loved. You are heard. You are understood. You do belong, and I want you to know that as your president, all of us on this stage have your back. We have your back,” Biden said, adding, “We see you for who you are: made in the image of God and deserving respect and support.”

He signed an executive order directing “key federal agencies to protect our community from those hateful attacks and advance equality for families.”

"The executive order will also support the mental health of children by addressing bullying, and suicide, and making our school safer. Addressing the nation’s mental health crisis is a key pillar of the Unity agenda I announced in the State of the Union address,” the president added.

He said that his executive order will “also take on discrimination that children and parents face in foster care” and that he plans to “support older adults so they can age with dignity.”

He called on Congress to pass the Equality Act, which he said “will enshrine the long overdue civil rights of all Americans.”