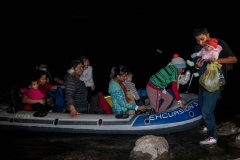 (CNSNews.com) – President Joe Biden said Friday that the U.S. has gotten control of the U.S.-Mexico border and apprehensions are “way down now.”

When asked whether what’s happening at the border is a crisis, Biden told NBC’s “Today Show” that “it is getting urgent action now. For example, a month ago, we had thousands of young kids in custody in places they shouldn't be, and controlled by the Border Patrol. We have now cut that down dramatically.

“Hey, look, here's what happened, Craig. The failure to have a real transition, the two departments that didn't -- you give us access to virtually anything were the immigration, and the Defense Department. So we didn't find out they had fired a whole lot of people that they were understaffed considerably,” he said.

NBC’s Craig Melvin pointed out that in April alone, 170,000 migrants were arrested at the border – a 20-year record.

“There are 22,000 unaccompanied children in our country right now. That's a record. That sounds to most folks like a crisis,” Melvin said.

“They didn't plan for the Department of Health and Human Services to have places to take the kid from the Border Patrol and put them in beds where there's security and there were people that can take care of them. So there's a significant change right now, significant change in the circumstances for children coming to and at the border,” he added.

Melvin noted that the president pledged during his campaign to reunite hundreds of children who were separated from their parents by the Trump administration.

“According to our reporting, and in your first 100 days, not one child has been reunited? How is that?” Melvin asked.

“I don't think that's true. That could be. What we have done is we have united children with their families as they have come across the border, but one of the things is we don't know yet where those kids are. We're trying like hell to figure out what happened. It's almost like being a sleuth, and we're still continuing to try like hell to figure out where they are,” Biden said.

“You have said to migrants, don't come. You're very clear. Would you tell parents in Central America and Mexico, don't send your kids?” Melvin asked.

“Absolutely,” the president said. “And look, here's the deal –“

“So don't send your kids. That's the message,” Melvin said.

“Do not send your kids, period. They're in jeopardy making that thousand-mile trek. So what we're doing now is we're going back to those countries in question where most of them are coming from and saying look, you can apply from your country. You don't have to make this trek,” Biden said.