Biden to Visit Arizona, But Not the Border 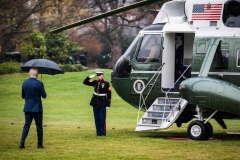 President Joe Biden walks to Marine One prior to departing from the South Lawn of the White House in Washington, DC, December 6, 2022, as he travels to Arizona. (Photo by SAUL LOEB/AFP via Getty Images)

(CNSNews.com) – President Biden travels to Arizona on Tuesday, but instead of visiting the border, he’s going to promote the CHIPS Act.

When asked Monday whether the president plans to go to the border to see the situation for himself, White House Press Secretary Karine Jean-Pierre said, “So, look, I want to be very clear here.

The president’s trip tomorrow is about the American manufacturing boom we’re seeing all across the country thanks to, again, his economic policies — again, more than we have seen in his — his, you know, almost two-year term; more than 700,000 jobs — manufacturing jobs that have been created just here alone in the United States.

So, he’ll be visiting at TSMC, a company making a major investment to manufacturing cutting-edge chips in Phoenix.

This investment will bring new jobs and economic opportunity to Arizona — very important to the people in Arizona, and it’s in large part thanks to the CHIPS and Science Act the president signed into law — and a historic — let’s not forget — a bipartisan piece of legislation, and, look, we should be able to reach a bipartisan — you know, a bipartisan agreement on immigration too, and that’s what we’re calling for. Right?

We’re asking for Republican officials to come and work with us and let’s have a bipartisan agreement on immigration, instead of doing political stunts, instead of doing what they’re doing: going to the border, not actually coming up with any real ideas about that. That’s where I will leave it.

That’s what the president is doing tomorrow. He’s going to go to Arizona to talk about an important initiative that’s going to change Americans’ lives, specifically in Arizona.

JEAN-PIERRE:  Look, I addressed this last week about the president visiting the border. I’m not going to go beyond what I just laid out.

I think and we believe the question, again, as I was just answering to your colleague in the back, is that: What are congressional Republicans going to do to actually deal with this issue instead of doing political stunts — many of them political stunts that hurt families, that hurt kids, that hurt children — right? — that hurt people who are — who are coming here to try to seek asylum — leaving a, you know, leaving a dictatorship?

Instead of going to the border and talking about — you know, about things that — not going to actually deliver and keep our borders safe, why don’t they work with us? Why don’t they actually do something?

Why don’t they actually, you know, help the president get the funding that he requested — historic funding to — into homeland — into the Department of Homeland Security? That’s one way of doing that, but again, they’re playing political games and doing political stunts.

HEINRICH: But the reason I ask is just because the president had said previously that he hadn’t had a lot of time to get to the border.  He’s going to a border state tomorrow, so you’d think maybe there would be time there.  If there isn’t tomorrow, can you say, at this point, that he —

JEAN-PIERRE:  What I’m saying is: Tomorrow, he’s going to actually focus on an issue — a bipartisan issue that was voted in Congress — the CHIPS and Science Act — something that is going to deliver for the people in Arizona, creating jobs and making people’s lives better, and making sure that we are bringing manufacturing back into the U.S.  That is critically important.

Now, what I’m saying — the second part of that, to your question: If Republican officials truly, truly want to deal with immigration — if they truly want to deal with the border, then they would stop doing political stunts and actually work with us on the plan that we have put forward, which they are not, and that’s what we want to make very loud and clear.

There’s ways to deal with this.  Again, they can come and actually do this in a bipartisan way, just like we did with the CHIPS and Science Act.

HEINRICH: So the trip is obviously to Phoenix, not to the border, not to Georgia, which is sort of a pressing issue for Democrats, for the President. Have Democrats determined that a visit to Georgia would not help Senator Warnock’s reelection bid?

JEAN-PIERRE:  The president actually — and I actually already answered this, and I’ll just repeat what I just said: The president — when — and I want to be very careful about talking about an election that’s happening tomorrow, because it’s an ongoing — it’s an election, and I’m have — I’m covered under the Hatch Act, so I’m not going to comment on that specifically, but when I — when we look back on the President’s role during the midterm elections, he played a significant role for Democrats.

It was because — again, I just answered this question — it was because of the way he made the contrast with Republican officials, again, who wanted to put — who talked about putting Social Security and Medicare on the chopping block because they were upset about the Inflation Reduction Act — which is a historic piece of legislation, is going to lower costs for American families — that’s what they were upset about; because we were saying we wanted to make sure big corporations pay their fair share and not put it on the little guy, and — and that’s what they put forward, and the American people were very — spoke very loud and clear.