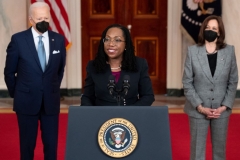 Judge Ketanji Brown Jackson, with President Joe Biden and Vice President Kamala Harris, speaks after being nominated for the US Supreme Court at the White House in Washington, DC, on February 25, 2022. (Photo by SAUL LOEB/AFP via Getty Images)

(CNSNews.com) - President Biden announced Friday that he’s nominating Ketanji Brown Jackson as the first African-American woman to serve on the U.S. Supreme Court, saying that “her opinions are always carefully reasoned, tethered to precedent and demonstrate respect for how the law impacts everyday people.”

“It's my honor to introduce a daughter of former public school teachers, a consensus builder and an accomplished lawyer, a distinguished jurist on one of the nations’ most prestigious courts. My nominee for United States Supreme Court is Ketanji Brown Jackson,” Biden said.

“She served both in public service as a federal public defender and in private law practice as an accomplished lawyer with a prestigious law firm,” the president said.

‘If confirmed, she will join Justice Sotomayor as the only other member of the United States Supreme Court who has experience as a trial court judge, a critical qualification in my view, and once again, and following in the footsteps of her mentor Justice Breyer, she’d become the only member of the court who previously served as a member of the U.S. Sentencing Commission,” Biden said.

The president pointed out that Judge Jackson has family members who are in law enforcement, which “brings additional perspective as well.”

“She comes from a family of law enforcement with her brother and uncles having served as police officers. That's one reason I expect by the Fraternal Order of Police, the national organization today said, and I quote ‘there’s little doubt she has the temperament, the intellect, the legal experience and family background to have earned this appointment,’ and they went on to say they’re confident she will ‘approach her future cases with an open mind and treat issues related to law enforcement fairly and justly,’” he said.

“You may have read that I have one uncle who got caught up in the drug trade and received a life sentence. That is true. But law enforcement also runs in my family. In addition to my brother, I had 2 uncles who served decades as police officers, one of whom became the police chief in my hometown of Miami, Florida,” she said.

“Her opinions are always carefully reasoned, tethered to precedent and demonstrate respect for how the law impacts everyday people. That doesn't mean she puts her thumb on the scale of justice one way or the other, but she understands the broader impact of her decisions - whether it’s cases addressing the rights of workers or government service, she cares about making sure that our democracy works for the American people,” Biden said