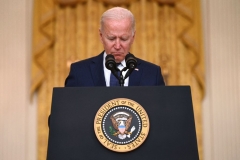 President Joe Biden pauses as he delivers remarks on the terror attack at Hamid Karzai International Airport, and the US service members and Afghan victims killed and wounded, in the East Room of the White House, Washington, DC on August 26, 2021. (Photo by JIM WATSON/AFP via Getty Images)

(CNSNews.com) - President Joe Biden said Thursday that he bears responsibility for what “happened of late” in the Afghanistan withdrawal, but he blamed former President Donald Trump for making a deal with the Taliban in the first place to withdraw U.S. forces from the region by May 1.

After addressing the nation about the suicide bomb attack in Kabul that claimed the lives of 13 U.S. troops, Biden was asked whether he’s responsible for what happened in Afghanistan in the last two weeks leading up to his Aug. 31 deadline.

“Mr. President, there have not been a U.S. servicemember killed in combat in Afghanistan since February of 2020. You set a deadline. You pulled troops out. You sent troops back in, and now 12 Marines are dead. You said the buck stops with you. Do you bear any responsibility for the way that things have unfolded in the last two weeks?” Fox News White House Correspondent Peter Doocy asked.

BIDEN: I bear responsibility for fundamentally all that’s happened of late. Here’s the deal. You know - I wish you’d one day say these things - you know as well as I do that the former president made a deal with the Taliban that he would get all American forces out of Afghanistan by May 1. In return the commitment was made - and that was a year before - in return he was given the commitment that the Taliban would continue to attack others but would not attack any American forces. Remember that? I’m being serious. I’m asking you a question.

DOOCY: Do you think that people have issue with pulling out of Afghanistan or just the way that things have happened?

BIDEN: I think they have an issue that people are likely to get hurt, some as we’ve seen have gotten killed, and that it is messy. The reason why - whether my friend will acknowledge it who has reported it - the reason why there were no attacks on Americans as you said from the date until I came into office was because the commitment was made by President Trump, I will be out by May 1st. In the meantime, you agree not to attack any Americans. That was the deal. That’s why no American was attacked.

DOOCY: A few days ago, you said you squarely stand by your decision to pull out.

BIDEN: Yes, I do, because look at it this way folks, and I’m gonna-- I have another meeting for real. Imagine where we’d be if I had indicated on May the 1st I was not going to renegotiate an evacuation date. We were going to stay there. I’d have only one alternative - pour thousands of more troops back into Afghanistan to fight a war that we’d already won relative to why the reason why we went in the first place.

I have never been of the view that we should be sacrificing American lives to try to establish a democratic government in Afghanistan, a country that has never once in its entire history been a united country and is made up - and I don’t mean this in a derogatory -- made up of different tribes who have never, ever, ever gotten along with one another, and so, as I said before, and this is the last comment I’ll make. We’ll have more chance to talk about this unfortunately beyond, because we’re not out yet.

If Osama bin Laden as well as al Qaeda had chosen to launch an attack when they left Saudi Arabia out of Yemen, would we have ever gone to Afghanistan even though the Taliban completely controlled Afghanistan at the time. Would we have ever gone? I know it’s not fair to ask you questions. It’s rhetorical, but raise your hand if you think we should have gone and given up thousands of lives and tens of thousands of wounded.

Our interest in going was to prevent al Qaeda from re-emerging. First, to get bin Laden, wipe out al Qaeda in Afghanistan, prevent that from happening again. As I’ve said 100 times, terrorism has metastasized around the world. We have greater threats coming out of other countries a heck of a lot closer to the United States.

We don’t have military encampments there. We don’t keep people there. We have over the horizon capability to keep them from going after us. Ladies and gentlemen, it was time to end a 20-year war.