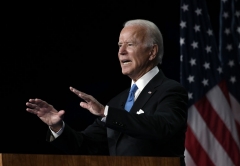 (CNSNews.com) - Former Vice President Joe Biden seized on a report in The Atlantic - which President Donald Trump denies to be true - which claims that the president called fallen soldiers “losers” and “suckers” during a trip to France in 2018 for ceremonies marking the 100th anniversary of the end of World War I.

“If what is written in the Atlantic is true, it’s disgusting, and it affirms what most of us believe to be true. Donald Trump is not fit to do the job of president, the commander-in-chief. President reportedly said -- I emphasize reportedly said -- those that sign up to serve instead of doing something more lucrative are suckers,” Biden said, speaking to reporters in Wilmington, Del., on Friday.

“Let me be real clear. When my son was an assistant U.S. attorney and volunteered to go to Kosovo while the war was going on as a civilian, he wasn't a sucker. My son volunteered and joined the United States military as the attorney general, went to Iraq for a year, won the Bronze Star and other commendations. He wasn't a sucker,” the Democratic presidential nominee said.

“The service men and women he served with, particularly those that didn't come home, were not losers. If these statements are true, the president should humbly apologize to every Gold Star mother and father, every Blue Star family that he's denigrated and insulted. Who the heck does he think he is? Is it true? Well, we've heard from his own mouth his characterizations of John McCain as a loser in 2015,” Biden said.

Donald Trump said he was not a war hero. I like people that weren't captured. Good for him, and his dismissal with a traumatic brain injury of troops suffered in Iraq as mere headaches not too long ago. He stood by failing, failing to take action or even raise the issue with Vladimir Putin while the Kremlin puts bounties on the heads of American troops in Afghanistan.

“It's a sacred duty. You're tired of hearing me saying this. Those of you covering me for years know I get in trouble for saying it. I'm going to say it again. We have many obligations to the government. We have one truly sacred obligation. Equip and support those we send in harm's way, care for families while they're gone and care for them when they're home.

That’s the only truly sacred obligation the government has. Duty, honor, country. These are values that drive our service members. It's an all voluntary outfit. President Trump has demonstrated he has no sense of service - no loyalty to any cause other than himself.

If I have the honor of being the next commander-in-chief, I will ensure that our American heroes know I'll have their backs, honor their sacrifice and those who have been injured will be in military parades. Always caution not to lose my temper. This may be as close as I've come in this campaign. Just a marker of how deeply President Trump and I disagree about the role of the president of the United States of America.

A reporter asked Biden what Trump’s reported remarks tells the former vice president “about President Trump’s soul and the life he leads.

“I’ve just never been as disappointed in my whole career with a leader that I’ve worked with - president or otherwise - that if the article’s true, and it appears to be based on the things he’s said it is absolutely damnable. It is a disgrace,”Biden added.