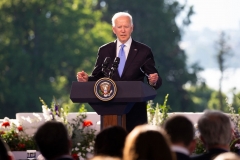 President Joe Biden holds a press conference after the US-Russia summit in Geneva on June 16, 2021. (Photo by PETER KLAUNZER/POOL/AFP via Getty Images)

(CNSNews.com) - President Joe Biden said Wednesday that he stressed to Russian President Vladimir Putin that if Russia interferes with the critical infrastructure of the United States, the U.S. will respond “in a cyber way.”

Speaking to reporters after his hours-long meeting with Putin, Biden was asked after giving the Russian leader a list of critical infrastructure in the U.S., whether he laid out clearly what the penalty will be if Russia interfered with that.

“I pointed out to him, we have significant cyber capability, and he knows it. He doesn't know exactly what it is, but it's significant, and if, in fact, they violate these basic norms, we will respond in a cyber way. He knows. In a cyber way,” Biden said.

“Number two, I think that the last thing he wants now is a cold war. Without quoting him, which I don’t think is appropriate, let me ask you a rhetorical question. You’ve got a multi-thousand mile border with China. China is moving ahead hell-bent on election as they say seeking to be the most powerful economy in the world, the largest and most powerful military in the world,” the president said.

“You are in a situation where your economy is struggling. You need to move it in a more aggressive way in terms of growing it, and I don't think he’s looking for a cold war with the United States. I don’t think it’s about a – as I said to him, I said your generation and mine are about 10 years apart,” he added.

“This is not a kumbaya moment as we used to say I can the 60's in the United States like let’s hug and love each other, but it's clearly not in anybody's interest – your country’s or mine - for us to be in a situation where we are in a new cold war, and I truly believe he thinks that,” Biden said.

The president said that Putin is “concerned about being ‘encircled.’”

“He still is concerned that we in fact are looking to take him down et cetera. He still has those concerns, but I don't think they are the driving forces the kind of relationship he’s looking for with the United States,” Biden added.