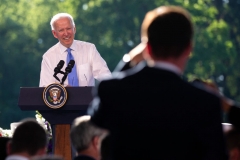 President Joe Biden holds a press conference after the US-Russia summit in Geneva on June 16, 2021. (Photo by PETER KLAUNZER/POOL/AFP via Getty Images)

(CNSNews.com) – President Joe Biden called it “a ridiculous comparison” that Russian President Vladimir Putin’s tried to make in justifying his crackdown on opposition leaders by saying he wants to prevent something like the Jan. 6 Capitol riots from happening in Russia and to prevent groups like Black Lives Matter from forming.

“When President Putin was questioned today about human rights, he said the reason why he's cracking down on opposition leaders is because he doesn't want something like January 6th to happen in Russia and he also said he also doesn't want to see groups formed like Black Lives Matter. What’s your response to that?” PBS Newshour White House Correspondent Yamiche Alcindor asked.

“My response is kind of what I communicated it that I think that's a ridiculous comparison. It's one thing for it literally criminals to break through, cordon, go into the capital, kill a police officer and be held unaccountable than it is for people objecting and marching on the capital and saying, you are not allowing me to speak freely, you are not allowing me to do A, B, or C, and so they’re very different criteria,” Biden said.

Alcindor also asked whether Biden issued any ultimatums to Putin during their hours-long meeting when it came to ransomware and how would Biden “measure success especially when it comes to these working groups on Russian meddling and on cybersecurity.”

“It’s going to be really easy,” the president said. “They either, for example on cybersecurity, are we going to work out where they take action against ransomware criminals on Russian territory? They didn't do it. I don't think they planned it in this case, and are they going to act? We’ll find out. Will we commit?

“What can we commit to act in terms of anything affecting and violating international norms that negatively affect Russia? What are we going to agree to do? I think we will have real opportunities to move and I think one of the things that I noticed when we had the larger meet is that people who are very, very well-informed started thinking, you know, this could be a real problem,” Biden said.

“What happens if that ransomware outfit were sitting in Florida or Maine and took action as a I said on their single lifeline to the economy – oil? That’d be devastating, and they’re like, you can see them kind of go, we do that but like, whoa. So it's in everybody's interest that these things be acted on. We’ll see though what happens with these groups we put together,” he said.