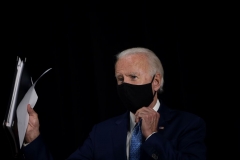 US Democratic presidential candidate Joe Biden leaves after speaking about the coronavirus pandemic and the economy on June 30, 2020, in Wilmington, Delaware. (Photo by BRENDAN SMIALOWSKI/AFP via Getty Images)

At a press conference in Wilmington, Del., Biden was also asked whether he has been tested for “some degree of cognitive decline.”

“I've been tested, and I’m constantly tested. Look, all you've got to do is watch me, and I can hardly wait to compare my cognitive capabilities to the cognitive capability of the man I'm running against,” the presumptive Democratic presidential nominee said.

Biden also said he supports taking down Confederate statues, but it’s the responsibility of elected officials to move them.

The former vice president was asked whether Confederate monuments are worthy of preservation and whether they should be torn down without the vote of local elected officials.

“I think it's very different. I think it's better if they’re taken down like they took the Confederate flag off the Mississippi flag. That's a better way of doing it, but I can understand. I can understand the anger and anguish that people feel by having, for years and years, been under the statue of Robert E. Lee, who if you’re an African-American, so it’s a difference,” he said.

Biden said that “there’s a distinction between-- and those monuments, and I shift responsibility, and I’m not--- I think at the elected officials where those statues are have a responsibility to move.”

“Put them in museums. Get them down, but don't expect, if you have sitting in front of you after all these years and you finally, finally are going through another phase of maybe responding to the systemic racism in America and what we've seen happen, don't be surprised if someone pulls down the statue of Jefferson Davis.

Biden then confused the Thomas Jefferson Memorial for with the Lincoln Memorial.