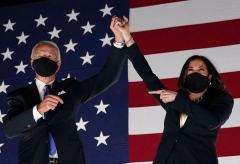 (CNSNews.com) – Former Vice President Joe Biden in discussing how he and Sen. Kamala Harris (D-Calif.) will deal with disagreements told CNN’s Jake Tapper on Thursday that he will handle it much like he did with former President Barack Obama.

“The thing we are simpatico on our philosophy of government and simpatico on how we want to approach these issues that we're facing, and so I don't have – and when we disagree, it will be just like -- so far it's been just like Barack and I did. It's in private. She'll say I think we should do a, B, C, or D, and I'll say I like A, don't like B or C. Okay, and like I told Barack, if I read something where there's a fundamental disagreement we have based on a moral principle, I'll develop some disease and say I have to resign,” Biden said.

Tapper asked Harris whether she will take over Vice President Mike Pence’s role leading the COVID-19 task force and specifically what her “portfolio will be.”

TAPPER: Madam Vice President, Vice President Pence right now is leading the COVID-19 task force. Are you going to continue that position? What will your specific portfolio be? And how do you plan on working with your new boss? Will you have weekly lunches? Will you be the last one he speaks to before he makes a decision as then Vice President Biden did with then President Obama? How do you see your role?

TAPPER: Yes, to all of that? So COVID task force, weekly lunches.

HARRIS: I'll take the last point first. Which is if the future is determined in any way based on what has been happening. We are full partners in this process, and I will tell you that the president-elect has been -- since the first day he asked me to join him on the ticket been very clear with me that he wants me to be the first and the last in the room and so on every issue that impacts the American people. I will be a full partner to the president elect and the president and whatever our priorities are, I will be there to support him and support the American people.

TAPPER: Do you have a portfolio that you see yourself taking-- he was in charge of the recovery act during the great recession. Will you head up the COVID task force? Is there an issue that you really want to focus on?

BIDEN: Jake, let me take a shot at that. I headed the Recovery Act, not because I said that's what I wanted to do. The deal the president and I made is the same thing I'm asking the vice president to do, and that is there are so many things that are going to land on this president's desk, me in this case, everything - as I said about Barack - everything but locusts is going to land on this. We have significant problems. Whatever the most urgent need is that I'm not able to attend to, I have confidence in me turning to her.

Just as It wasn't that Barack said well, you know, Joe, we're going to have a stimulus and I want you to handle it. This was we've got to get this stimulus passed, I'm working on this. Look Joe, you take it. Okay? This is what I want you to do. So unlike the previous portfolio where Al Gore said look, let me take a -- let me do environment.

When I was asked the question, when I asked her the question, no, I'll do whatever the urgent need is at the moment, and that's how it's going to work. Look, there's not a single decision I've made yet about personnel or about how to proceed that I haven't discussed it with Kamala first.

Tapper asked what Harris people should call her husband, and she said the term that has evolved is “the second gentleman.”

TAPPER: What has been -- she was one of your fiercest competitors in the early days of the primary, and now she and Doug Emhoff -- which by the way, is he the second gentleman? Is he the second dude? What should we be calling him?

HARRIS: Well, I think that the term has evolved into the second gentleman.

TAPPER: The second gentleman. I like second dude, but I will defer.

HARRIS: I think some of his friends are inclined to say that.

TAPPER: But you'll call him the second gentleman.

HARRIS: No, I'll call him honey.

TAPPER: You'll call him honey. Okay. But now they're part of the team.

Tapper asked Biden what the biggest surprise was about working with Harris, pointing out that Biden knew Harris through his late son, Beau Biden, who served as Delaware’s attorney general before his death.

TAPPER: They're no longer competitors. What's been the biggest surprise about working with her? I know you knew her before through Beau --

BIDEN: Well, look, there hasn't been any surprise because we had the discussion about this beforehand. Beforehand. First of all, I understand how campaigns can sometimes get a little out of whack a little bit. And as I told her, you know because you asked the question, I don't hold grudges. I mean That's why Richard Ben Kramer questioned whether I was really Irish. You know I mean, But all kidding aside --

TAPPER: The first lady-to-be told me she holds them for you.

BIDEN: Yes, she does, but she and Kamala have become friends, but all kidding aside, it's a matter of -- the thing we are simpatico on our philosophy of government and simpatico on how we want to approach these issues that we're facing, and so I don't have – and when we disagree, it will be just like -- so far it's been just like Barack and I did. It's in private. She'll say I think we should do a, B, C, or D, and I'll say I like A, don't like B or C. Okay, and like I told Barack, if I read something where there's a fundamental disagreement we have based on a moral principle, I'll develop some disease and say I have to resign.