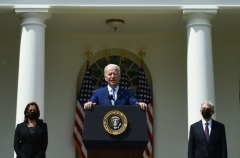 President Joe Biden speaks as Vice President Kamala Harris (L) and Attorney General Merrick Garland look on during an event about gun violence prevention in the Rose Garden of the White House in Washington, DC, on April 8, 2021. (Photo by BRENDAN SMIALOWSKI/AFP via Getty Images)

(CNSNews.com) – President Joe Biden outlined steps he plans to take to curb gun violence, which he called an “epidemic” and “an international embarrassment.”

Speaking in the White House Rose Garden on Thursday, Biden said his proposals will not infringe on the Second Amendment.

“Today we are taking steps to confront not just the gun crisis but what is actually a public health crisis. Nothing, nothing I'm about to recommend in any way impinges on the Second Amendment,” the president said, adding that opponents of gun control use “phony arguments suggesting that these are Second Amendment rights at stake.”

“No amendment to the Constitution is absolute,” he said. “You can't yell fire in a crowded movie theater and call it freedom of speech. In the very beginning, you couldn't own any weapon you wanted to own. From the very beginning that the Second Amendment existed, certain people weren't allowed to have weapons, so the idea is just bizarre to suggest that some of the things we are recommending are contrary to the Constitution.

The president said he called on Attorney General Merrick Garland and the DOJ to identify “immediate concrete actions” he could take now without having to go through Congress.

Biden plans to target so-called “ghost guns,” which can be manufactured at home and have no serial numbers, so they cannot be traced. He’s requiring manufacturers to “make key parts with serial numbers” and for sellers of the ghost gun kits to run background checks on the buyers.

"And today I'm announcing several initial steps my administration is taking to curb this epidemic of gun violence. Much more need be done, but the first, I want to rein in the proliferation of so-called 'Ghost guns.' These are guns that are homemade, built from a kit and include directions on how to finish the firearm. You can go by the kit. They have no serial numbers, so when they show up at a crime scene, they can't be traced, and the buyers aren't required to pass a background check to buy the kit, to make the gun," the president said.

"Consequently, anyone from a criminal to a terrorist can buy this kit, in as little as 30 minutes, put together a weapon. I want to see these kits treated as firearms under the gun control act, which is gonna require that the seller and manufacturers make the key parts with serial numbers and run background checks on the buyers when they walk in to buy that package," he said.

Biden is calling on the Bureau of Alcohol, Tobacco, and Firearms (ATF) to release a report on firearms trafficking in America.

"The second action we are going to take, back in the year 2000, the Bureau of Alcohol, Tobacco and Firearms released a report on its investigations of firearms trafficking in America. The report was of pivotal value. It was an important tool for policymakers when I was in the senate and beyond at all levels to stop firearms from being illegally diverted into dangerous hands," the president said.

"Today, with online sales and ghost guns, times and trafficking methods have changed, and we have to adjust. We also have to ask the Justice Department to release a new annual report. This report will better help policymakers address firearms trafficking as it is today, not what it was yesterday," he said.

The president also wants to make guns modified with stabilizing braces subject to the National Firearms Act. He also wants to create national red flag laws, which would allow law enforcement or loved ones to petition the court to have firearms removed from people they consider a danger to themselves or others, and he announced the nomination of David Chipman to head the ATF.

The third change, we want to treat pistols, modified with stabilizing braces with the seriousness they deserve. A stabilizing brace on a pistol essentially makes that pistol a hell of a lot more accurate than a mini rifle. As a result, it’s more lethal, effectively turning it into a short-barreled rifle. That’s with the alleged shooter in Boulder appears to have done.

I want to be clear that these modifications to firearms that make them more lethal should be subject to the National Firearms Act. The National Firearms Act requires that a potential owner pay a $200 fee and submit their name and other identifying information to the Justice Department, just as they would if they went out and purchased a silencer for a gun.

Fourthly, during my campaign for president, I wanted to make it easier for states to adopt extreme risk protection order laws. They’re also called red flag laws which many people on this lawn knows, but many people listening do not know. These laws allow police or family member to petition a court in their jurisdiction and say, I want you to temporarily remove from the following people any firearm they may possess, because they’re a danger in a crisis. They’re representing a danger to themselves and others, and a court makes a ruling.

To put this in perspective, more than half of all suicides, for example, involve the use of a firearm, but when a gun's not available, an attempt at suicide, the death rate drops precipitously. States that have red flag laws have seen and seen the reduction in the number of suicides in their states. Every single month, by the way, an average of 53 women are shot and killed by an intimate partner.

I wrote the Violence Against Women Act. It's been a constant struggle to keep it moving. We know red flag laws can have significant affect in protecting women from violence, and we know red flag laws can stop mass shooters before they can act out their violent plans. I am proud, excuse the point of personal privilege we used to say in the senate, I’m proud the red flag law in my home state of Delaware, is named after my son Beau Biden -- our son, excuse me, Jill, who proposed that legislation back in 2016. I want to see a national red flag law and legislation to incentivize states to enact their own red flag laws.

Today, I asked the Justice Department to publish a model red flag legislation, so states can start crafting their own laws right now. Just like with background checks, the vast majority of Americans support these extreme risk protection order laws, and it's time to put these laws on the books and protect even more people. The attorney general will have more to say about this in a moment. Additionally, we recognize that cities across the country are experiencing historic spikes in homicides, as the law enforcement can tell you. The violence is hitting black and brown communities the hardest.

Homicide is the leading cause of black boys and men ages 15 to 34, the leading cause of death, but there are proven strategies that reduce gun violence in urban communities, and there are programs that demonstrated they can reduce homicides by up to 60% in urban communities, but many of these have been badly underfunded or not funded at all of late.

Gun violence in America, for those of you who think about this from an economic standpoint listening to me, estimate to cost the nation $280 billion -- let me say it again, $280 billion a year. You say, how could that be, Joe? Hospital bills, physical therapy, trauma counseling, legal fees, prison costs, and the loss of productivity, not to mention the psychological damage done to the children who live in these cities, watching this happen, knowing someone it happened to.