Biden: ‘Climate Change Is Literally an Existential Threat to Our Nation and to the World’ 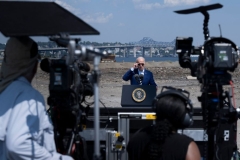 (CNSNews.com) - President Biden said Wednesday that he’s planning to issue executive orders to combat climate change, which he called an “emergency,” after Congress failed to act.

“We see here in America, in red states and blue states, extreme weather events costing $145 billion — $145 billion in damages just last year — more powerful and destructive hurricanes and tornadoes. I’ve flown over the vast majority of them out west and down in Louisiana, all across America,” the president said. “It’s amazing to see.

“Ravaging hundred-year-old droughts occurring every few years instead of every hundred years.  Wildfires out west that have burned and destroyed more than 5 million acres — everything in its path. That is more land than the entire state of New Jersey, from New York down to the tip of Delaware. It’s amazing. Five million acres,” he said.

“Our national security is at stake as well. Extreme weather is already damaging our military installations here in the states, and our economy is at risk. So we have to act. Extreme weather disrupts supply chains, causing delays and shortages for consumers and businesses. Climate change is literally an existential threat to our nation and to the world,” Biden said.

The president said that his administration will announce “in the coming days” the executive actions it plans to take “to combat this emergency.”

“Since Congress is not acting as it should — and these guys here are, but we’re not getting many Republican votes — this is an emergency, an emergency, and I will — I will look at it that way,” he said.

“But just take a look around: Right now, 100 million Americans are under heat alert — 100 million Americans. Ninety communities across America set records for high temperatures just this year, including here in New England as we speak, and, by the way, records have been set in the Arctic and the Antarctic, with temperatures that are just unbelievable, melting the permafrost, and it’s astounding the damage that’s being done,” Biden said.

The president is making what he described as “the largest investment ever – $2.3 billion — to help communities across the country build infrastructure that is designed to withstand the full range of disasters we’ve been seeing up to today -– extreme heat, drought, flooding, hurricanes, tornadoes.”

“Right now, there are millions of people suffering from extreme heat at home. So my team is also working with the states to deploy $385 million right now. For the first time, states will be able to use federal funds to pay for air conditioners in homes, set up community cooling centers in schools where people can get through these extreme heat crises, and I mean people — and crises that are 100 to 117 degrees,” he said.

In addition, Biden said that $3.1 billion approved by Congress in the infrastructure law will be used to “weatherize homes and make them more energy efficient, which will lower energy cost while keeping America cool in the summer and warm in the winter, and not using too much energy.”

Labor Secretary Marty Walsh is “developing the first-ever workplace standards for extreme heat, saying, under these conditions, if it hits this pr- — you cannot do the following — you cannot ask people to do a certain thing,” the president said.

“Second, he’s sending folks out from the Labor Department to make sure we hold workplaces and — to those standards that are being set. They’ve already completed over 500 heat-related inspections of workplaces across 43 states. At the end of the day, it’s going to save lives,” he said.

Biden gave his speech at Brayton Point, a former power plant that is now being used to manufacture cable that connects offshore wind turbines to the grid, according to National Climate Adviser Gina McCarthy.

“Now, let me tell you why we’re here at Brayton Point. Five years ago, this towering power plant that once stood with cooling towers 500 feet high closed down. The coal plant at Brayton Point was the largest of its kind in New England — 1,500 megawatts of power, enough to power one in five Massachusetts homes and businesses,” Biden said.

“For over 50 years, this plant supported this region’s economy through their electrici- — the electricity they supplied, the good jobs they provided, and the local taxes they paid, but the plant, like many others around the country, had another legacy: one of toxins, smog, greenhouse gas emissions, the kind of pollution that contributed to the climate emergency we now face today,” he said.

“Gina McCarthy, a former regulator in Massachusetts, was telling me on the way up how folks used to get a rag out and wipe the gunk off of their car’s windshields in the morning just to be able to drive,” the president said.