Biden to Announce Nomination of Ketanji Brown Jackson to SCOTUS 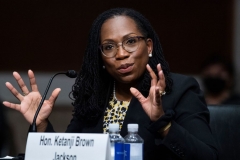 Ketanji Brown Jackson, nominated to be a US Circuit Judge for the District of Columbia Circuit, testifies before a Senate Judiciary Committee hearing on pending judicial nominations on Capitol Hill in Washington,DC on April 28, 2021. (Photo by TOM WILLIAMS/POOL/AFP via Getty Images)

(CNSNews.com) - President Joe Biden plans to announce his intention to nominate Judge Ketanji Brown Jackson, who currently serves on the U.S. Court of Appeals for the D.C. Circuit, for Supreme Court justice.

She would be the first black woman to serve on the high court if confirmed.

Biden is expected to make the announcement Friday afternoon at 2pm.

Jackson once served as a clerk for Supreme Court Justice Stephen Breyer, who she’s being nominated to replace.

She has “broad experience across the legal profession – as a federal appellate judge, a federal district court judge, a member of the U.S. Sentencing Commission, an attorney in private practice, and as a federal public defender,” according to the White House.

“Prior to serving as a judge, Judge Jackson followed in the footsteps of her mentor Justice Breyer by working on the U.S. Sentencing Commission—an important body, bipartisan by design, that President Biden fought to create as a member of the U.S. Senate.  Her work there focused on reducing unwarranted sentencing disparities and ensuring that federal sentences were just and proportionate,” the White House added.