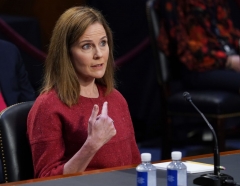 (CNSNews.com) – Supreme Court nominee Amy Coney Barrett told the Senate Judiciary Committee on Tuesday that she can and has set aside her Catholic beliefs regarding issues before her.

In an exchange with Chairman Lindsey Graham (R-S.C.), Barrett was asked about her Catholic faith and whether she can set aside her religious beliefs when deciding on issues before her.

Graham also asked her about the Supreme Court decisions that led to the legalization of abortion, same-sex marriage whether she owns a gun, and whether she can fairly decide gun cases, and the Citizens United case.

Barrett said she owns a gun and can fairly decide such cases.

On abortion, Graham asked Barrett if she would listen to both sides if litigation on his bill, which bans abortion on demand after 20 weeks of pregnancy.
Barrett answered: “Of course, I'll do that in every case.”

BARRETT: Most people think of Roe V. Wade, and Casey is the case after Roe that preserved Roe’s central holding but grounded it in a slightly different rationale.

GRAHAM: So what is that rationale?

BARRETT: Rationale is that the state cannot impose an undue burden on a woman's right to terminate a pregnancy.

GRAHAM: Unlike Brown, there are states challenging on the abortion front. There’re states that are going to a fetal heartbeat bill. I have a bill, Judge, that would disallow abortion on demand after 20 weeks, the fifth month of the pregnancy. We're one of seven nations in the entire world that allow abortion on demand at the fifth month. The construct of my bill is because a child is capable of feeling pain in the fifth month, doctors tell us to save the child's life, you have to provide anesthesia if you operate, because they can feel pain. The argument I’m making is if you have to provide anesthesia to save the child’s life, ‘cause they can feel pain, it must be a terrible death to be dismembered by an abortion. That's a theory to protect the unborn at the fifth month. If that litigation comes before you, will you listen to both sides?

BARRETT: Of course, I'll do that in every case.

GRAHAM: So I think 14 states have already passed a version of what I described. So there really is a debate in America still unlike Brown versus Board of Education about the rights of the unborn. That's just one example. So if there is a challenge coming from a state, if a state passes a law and it goes into court where people say this violates Casey, how do you decide that?

BARRETT: Well, it would begin in a district court in a trial court. The trial court would make a record. The parties would litigate and fully develop that record in the trial court. Then it would go up to an appeals court that would review that record looking for error, and then again, it would be the same process. Someone would have to seek certiorari at the Supreme Court. The Supreme Court would have to grant it, and at that point it would be the full judicial process. It would be briefs, oral argument, conversations with law clerks in chambers, consultation with colleagues, writing an opinion, really digging down into it. It's not just a vote. You all do that. You all have a policy, and you cast a vote. The judicial process is different.

GRAHAM: Okay. So when it comes to your personal views about this topic, do you own a gun?

BARRETT: We do own a gun.

GRAHAM:  Okay. All right. Do you think you could fairly decide a case even though you own a gun?

GRAHAM:  We've established that. The tenets of your faith mean a lot to you personally. Is that correct?
BARRETT: That is true.
GRAHAM: You've chosen to raise your family in the Catholic faith, is that correct?

GRAHAM:  Can you set aside whatever Catholic beliefs you have regarding any issue before you?

GRAHAM:  I would dare say there are personal thoughts on the Supreme Court, and nobody questions whether our liberal friends can set aside their beliefs. There’s No question -- no reason to question yours in my view. So the bottom line here is that there is a process. You fill in the blanks whether it's about guns and Heller, abortion rights. Let's go to Citizens United. To my good friend Senator Whitehouse. Me and you are going to come closer and closer about regulating money, ‘cause I don't know what's going on out there, but I can tell you there’s a lot of money being raised in this campaign. I’d like to know where the hell some of it is coming from, but that's not your problem. Citizens United says what?

BARRETT: Citizens United extends the protection of the First Amendment to corporations who are engaged in political speech.

GRAHAM: So if Congress wanted to revisit that and somebody challenged it under Citizens United that Congress went too far, what would you do? How would the process work?

BARRETT: Well, it would be the same process that I've been describing. First, somebody would have to challenge the law in a case - somebody who wanted to spend the money in a political campaign. It would wind its way up, and judges would decide it after briefs and oral argument and consultation with colleagues and the process of opinion writing.

BARRETT: Obergefell.
GRAHAM:  Okay, if there is a state that tried to outlaw marriage, and there’s litigation, would it follow the same process?

BARRETT: It would, and one thing I’ve neglected to say before that’s occurring to me now is that not only would someone have to challenge that statute, and somebody -- if they outlawed same-sex marriage, there would have to be a case challenging it. And for the Supreme Court to take it up, you’d have to have lower courts going along and saying we're going to flout Obergefell, and the most likely result would be that lower courts who are bound by Obergefell would shut such a lawsuit down, and it wouldn't make its way up to the Supreme Court, but If it did it would be the same process I’ve described.