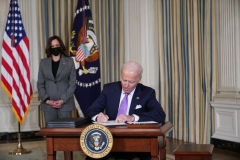 Vice President Kamala Harris (L) watches as US President Joe Biden signs executive orders after speaking on racial equity in the State Dining Room of the White House in Washington, DC on January 26, 2021. (Photo by MANDEL NGAN/AFP via Getty Images)

(CNSNews.com) - President Joe Biden in issuing executive orders on climate change essentially “drew a target on the back of American energy and then he pulled the trigger” and “killed the Keystone XL pipeline,” Sen. John Barrasso (R-Wyo.) said Thursday.

“President Biden in his inaugural address talked about unity, and by the time he got to the White House, that got thrown out the window, and he picked up his pen, and he drew a target on the back of American energy, and then he pulled the trigger. He killed the Keystone XL pipeline, and he’s killing energy jobs all around the country by stopping additional leasing for oil, gas, coal, all around America,” he said in an interview with Fox Business’s “Mornings with Maria Bartiromo.”

“That's maybe coming up as high as 30,000 jobs in Wyoming. What we're seeing here is the Green New Deal, basically dressed up in executive orders,” the senator said.

“Democrats have gone back to the blame America first approach,” Barrasso said. “The reason we want a strong energy economy in America is it’s jobs. It’s affordable energy, and because it’s of our own national security. Energy security is national security, and the money that comes from this, it goes for roads and bridges and schools.

“Even Democrats, a number of Democrats in the House from Texas are opposed to what the president is doing with the executive orders, and they're talking about a million jobs being lost in our country because of this approach, this far left radical approach that the president is taking on energy,” he added.

Fox Business host Jackie DeAngelis asked if the Democrats are playing right into Russia’s hands with respect to energy policy, because the U.S. had become the world’s top oil producer over Russia and Saudi Arabia.

“Absolutely. Energy is called the master resource for a reason. It powers our economy, our country, our military, and it is an instrument of power on the world stage. We don't want to become more dependent on other countries,” Barrasso said.

“We want other countries to be dependent upon us, and it's the American energy availability that has allowed us to do that. It seems that they want to turn back the clock to the old days of an Obama approach, which is what we're seeing with the Biden administration,” he said.

The U.S. needs “all of the energy,” Barrasso said. “We need renewables. We also need the oil, the gas, the coal, the uranium for nuclear power. We need it all. I know John Kerry said some of these folks can make solar panels. Anybody who believes that we're going to power this country and this economy with solar panels and wind turbines, they have to believe also in the Easter Bunny and the Tooth Fairy.”

Barrasso said you saw Rep. Alexandria Ocasio-Cortez (D-N.Y.) “coming out and saying look what I forced these guys to do.”

“It's amazing how scared they are of the liberal left. Even the unions have come out against what this administration is doing, because so many of these jobs are good union jobs that have been killed specifically with the Keystone XL Pipeline. American energy needs to continue to play the role in the world that we have, and I'm going to continue to fight for that as a senior member of the Energy Committee,” the senator said.

DeAngelis questioned whether Biden is bowing to pressure from the extreme left with his executive orders on climate change. “He's not going to be able to tow a moderate line, because he owes people things, and he's got an agenda to push here,” she said.

“Well, I think you're absolutely right, Jackie. You saw Bernie Sanders just the other day said we're going to continue to push Joe Biden as far to the left as we can, and he seems to be going over the cliff of the left,” Barrasso said.

On the issue of impeachment, Sens. Susan Collins (R-Maine) and Tim Kaine (D-Va.) are drafting a resolution to censure former President Donald Trump, instead of impeaching him after 45 Republican senators voted for a measure saying the impeachment trial would be unconstitutional.

When asked whether he would support censuring Trump, Barrasso said, “That's not what the House sent to the Senate. The House impeached the president, sent that to the Senate, and we'll be holding a trial in the next week or two. I believe it's unconstitutional. I'm one of the 45 Republican senators who voted to say exactly that. You cannot try a former president of the United States.

“What we see is a partisan crusade against the former president. Even the chief justice of the Supreme Court is not showing up for the trial. It was a rush to judgment in the House. It was a snap impeachment, and I swore an oath to the Constitution, and I believe it's unconstitutional to do this to a former president of the United States,” he said.