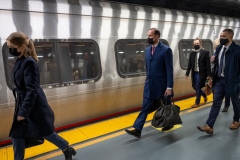 (CNSNews.com) - Amtrak President Stephen Gardner told the House Transportation Committee on Thursday that Amtrak will have to make cuts to its long-distance services to comply with the Biden administration’s federal contractor vaccine mandate on Jan. 4 of next year despite 94 percent of its workforce being fully vaccinated and 96 percent having received at least one vaccination shot.

“As part of addressing the challenges presented by COVID-19, Amtrak must comply with the federal mandate effective January 4, 2022 that employees of government contractors be fully vaccinated. Amtrak has strongly advocated that all our employees to be vaccinated and we have made great progress in achieving this important public health goal,” Gardner wrote in his opening testimony for the committee.

“However, because many engineers, conductors and on-board service employees retired or left Amtrak during the pandemic, and we temporarily halted hiring due to funding uncertainty and covid-related distancing requirements that inhibited training, we anticipate that we will not initially have enough employees to operate all the trains we are currently operating when the federal mandate takes effect,” Gardner added.

“At some of these crew bases across our network, we have a relatively high percentage of unvaccinated employees. If those employees chose to not get vaccinated by the deadline, we will not have sufficient trained staff to support current service frequency on affected routes, as engineers and conductors must undergo extensive training both when hired or promoted and to become qualified on the characteristics of each route on which they work,” Gardner added.

At Thursday’s White House press briefing, Fox News White House Correspondent Jacqui Heinrich said, “On vaccines, Amtrak which we know is near and dear to the president’s heart announced that they will potentially have to cut some long-distance roots because they don’t have enough employees to operate when the federal mandate takes effect, and that’s despite the report on the Hill today that 94 percent of their employees are vaccinated overall.

“Amtrak got $66 billion from the infrastructure deal. Now they’re talking about having to make cuts. Is this policy undermining the president’s own legislation?” she asked White House Press Secretary Jen Psaki.

Psaki applauded that 94 percent of the Amtrak workforce is vaccinated, and she pointed out that there’s still a month to go before the Biden administration’s deadline for federal contractors to comply with the mandate goes into effect.

Even then, the press secretary said that workers would not be immediately fired. They would go through a “process” with their human resources department that includes education, counseling, accommodations and then enforcement.

“First, I would say, and you touched on this Jackie, that it’s great news that 94 percent of Amtrak’s workforce is vaccinated. That is an enormous percentage of their workforce to state the obvious. They also still have about a month before the deadline for federal contractors on January 4th or at least a couple of weeks - four weeks approximately,” Psaki said.

“What we have conveyed to employers is that post-deadline we expect employers will follow their standard HR process. That means for employees not in compliance, they’ll go through their education, counseling, accommodations, and enforcement,” the press secretary said.

Meanwhile, on Tuesday, a federal judge in Georgia blocked the vaccine mandate for federal workers from going into effect nationwide on Jan. 4 as planned. The contractor mandate was already blocked in Kentucky, Ohio, and Tennessee.

"In contrast, declining to issue a preliminary injunction would force Plaintiffs to comply with the mandate, requiring them to make decisions which would significantly alter their ability to perform federal contract work which is critical to their operations," Baker wrote.