AG Merrick Garland: DOJ ‘Supports and Defends the 1st Amendment Rights of Parents to Complain’ About Their Children’s Education 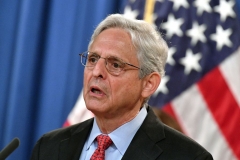 (CNSNews.com) - Attorney General Merrick Garland said Thursday that the DOJ “supports and defends the 1st Amendment rights of parents to complain as vociferously as they wish about the education of their children, about the curriculum taught in their schools.”

Chabot began by asking Judiciary Chairman Jerrold Nadler (D-N.Y.) for “unanimous consent” to enter into the record “an op-ed that appeared in last week’s Wall Street Journal by the author of the Patriot Act, Mr. Sensensbrenner, former chairman of this committee, entitled ‘The Patriot Act Wasn’t Meant to Target Parents.’”

CHABOT: Mr. Attorney General, most of us had other jobs before we got here to Congress. For example, I practiced law for quite a few years. I was a county commissioner. I was a member of Cincinnati City Council and before that, I was a school teacher in Cincinnati in the inner city. All the students in the school were African-American, and I taught the 7th and 8th grade.

It was my experience that the kids who did the best were the ones who had parental involvement in their education. Does that make sense to you?

CHABOT: Thank you. Now with that in mind, having parents involved in their children’s education, I have to say I find it deeply disturbing that the National School Board Association convinced the Biden administration to sick you and your Justice Department, the FBI, the full power of the federal law enforcement in this country on involved parents as if they were domestic terrorists. One of the tools in your arsenal of weapons of course is the Patriot Act that I just mentioned.

Not many current members of this committee were here when we passed the Patriot Act, but I was, and Mr. Chairman, you were too, and I remember clearly that we were both concerned about potential abuse of this new law enforcement tool, and that’s why for example, we insisted on sunset provisions on some aspects of the Patriot Act, but I can tell you not in a million years did we dream that one day we’d see the Justice Department treat American parents as domestic terrorists.

And in a primer on domestic terrorism issued last November by none other than the FBI, Mr. Attorney General, the FBI explicitly stated that ‘under FBI policy and federal law, no investigative activity related to domestic terrorism may be initiated based on 1st Amendent activity.’ Now parents speaking up at a school board meeting against the teaching of critical race theory or anything else that they want to talk about is clearly a 1st Amendment activity.

Now of course, school board meetings can sometimes be highly emotional affairs. Parents do care about their kids' education, how they’re being taught, what they’re being taught, and these parents have every right to be heard, even if former Virginia Gov. Terry McAuliffe thinks otherwise. Now no one has the right to be violent or threaten violence, and if anyone does that, they can be dealt with by security or by local law enforcement, but we don’t need the vast power of the federal government throwing its weight around.

We don’t need you, your Justice Department or the FBI trampling on the rights of American
parents who just want the best possible education for their children, so Mr. Attorney General, let me ask you this: According to the Sarasota Herald Tribune, one example of a so-called terrorist incident was a parent merely questioning whether school board members had earned their high school diplomas. Now that might have been rude, but does that seem like an act of domestic terrorism that you or your Justice Department ought to be investigating?

GARLAND: Absolutely not, and I want to be clear that the Justice Department supports and defends the 1st Amendment rights of parents to complain as vociferously as they wish about the education of their children, about the curriculum taught in their schools. That is not what the memorandum is about at all nor does it use the words domestic terrorism or Patriot Act.

Like you, I can’t imagine any circumstance in which the Patriot Act would be used in the circumstances of parents complaining about their children, nor can I imagine a circumstance where they would be labeled as domestic terrorism.

CHABOT: Thank you, I’m nearly out of time, so let me just conclude with this. We ought to be encouraging parents to be actively involved in the education of their children. After all, if our children are to be competitive with the children of Japan and South Korea and India and yes, China for tomorrow’s jobs, they better be getting a top-notch education in this country. Let’s support and welcome parental involvement, not use the vast powers of federal law enforcement to target parents as domestic terrorists.