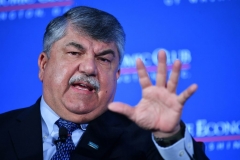 (CNSNews.com) - AFL-CIO President Richard Trumka admitted Sunday that President Joe Biden’s decision to shut down the Keystone XL Pipeline will “did and will” cost union jobs.

In an interview with “Axios” on HBO, host Jonathan Swan asked, “In his first hours as president, Joe Biden announced that he was going to cancel the Keystone XL Pipeline, and the Laborers' International Union of North America put out a statement saying that it's gonna cost a thousand union jobs. Can you explain why the president was right?”

“I wish he hadn't done that on the first day because the Laborers' International was right. It did and will cost us jobs in the process. I wish he had paired that more carefully with the thing that he did second, by saying', "Here's where we're creating jobs. We can do mine reclamation. We can fix leaks, and we can fix seeps and create hundreds of thousands of jobs in doing all of that stuff," Trumka said.

SWAN: You think Biden realizes that that was a mistake, that announcement?

TRUMKA: I think so, yes.

SWAN: Did you talk to him about it?

TRUMKA: I have not.

TRUMKA: And if I had, I wouldn't tell you.

SWAN: So why do you think he has come to that realization?

TRUMKA: Because the next time the subject came up, it was done the right way.

SWAN: When you said that the Laborers' International Union was correct in their statement, I want to read you part of their statement. They said, ‘We support the president's campaign to build back better. Killing good union jobs on day one with nothing to replace them is not building back better.’ Do you agree with that statement from Terry O'Sullivan?

SWAN: Okay. I appreciate your straightforwardness. Do you think Biden will shut down or cancel additional pipelines?

TRUMKA: I don't know. I know this: If he does, he'll pair it with job creation-- that will be greater than the number of jobs lost.

SWAN: How comfortable are you with Biden's plan to ban fracking on federal lands?

TRUMKA: I think it needs to be looked at, and studied, and carefully thought through. I think the future of the country should be considered in that process.

SWAN: He's promised to do it.

TRUMKA: I'm sure if he promised to do it he probably will. 'Cause--

TRUMKA: --He promised to shut down XL, and he did XL.

TRUMKA: But he's also promised to create jobs, good union jobs, and be the best union president that we ever had. And I believe he'll do that as well.

TRUMKA: Exactly. Wh-- when they laid off at the mines back in Pennsylvania, they told us they were gonna-- train us to be computer programmers.

SWAN: They actually said that?

TRUMKA: Yeah, that's what-- one of the things they want to transfer. And I said, "Where are the computer programmer jobs at?" "They're in-- Oklahoma, and they're in Vegas, and they're here." And I said, "So, in other words, what we're gonna be is unemployed miners and unemployed pr-- computer programmers as well." 'Cause people aren't gonna pick up roots and-- and leave their families--

TRUMKA: --And go to another part of the country very easily. That's home, and that's their culture. And I think what doesn't get understood quite enough in the country, particularly in D.C. politics, is that that culture is very, very important to the people who live there. And we want to make sure that that part of their life doesn't get ripped out of them as well.