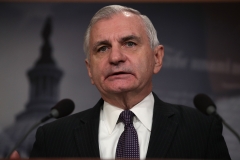 (CNS News) -- When asked if Facebook should be allowed to restrict speech on its platform, Senator Jack Reed (D-R.I.) did not answer directly but said, “I have not reached an opinion about how to maybe reform it or make it better.”

On Wednesday at the U.S. Capitol, CNS News asked the senator, “Should Facebook be allowed to restrict speech on its platform?”

Reed responded, “We’re just beginning to unravel what Facebook can and cannot do right now. I have not reached an opinion about how to maybe reform it or make it better.”