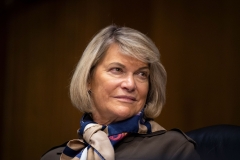 (CNS News) -- When asked if Facebook should be allowed to restrict speech on its platforms, Senator Cynthia Lummis (R-Wyo.) said, “I’m more focused on privacy than I am other ways to regulate them. So, for me, it’s not about free speech as much as it is about privacy.”

At the U.S. Capitol on Tuesday, CNS News asked the senator, “Should Facebook be able to restrict speech on its platform?”

Lummis replied, “I’m just going to that hearing now, and one of the questions that I intend to ask Ms. Haugen is, given her technical background and how they use their algorithms, what is the best way to regulate protections for young people?”

“So, the emotional damage that is occurring because of the manner in which they market to young people,” said Lummis.  “And their admission that their method is to increase profits by keeping people on their platform for longer periods of time, therefore allowing them to gather more information on children -- how can we best protect privacy?”

“So, I’m more focused on privacy than I am other ways to regulate them. So for me it’s not about free speech as much as it is about privacy.”